The crowning of the prettiest cow in Bern, Switzerland 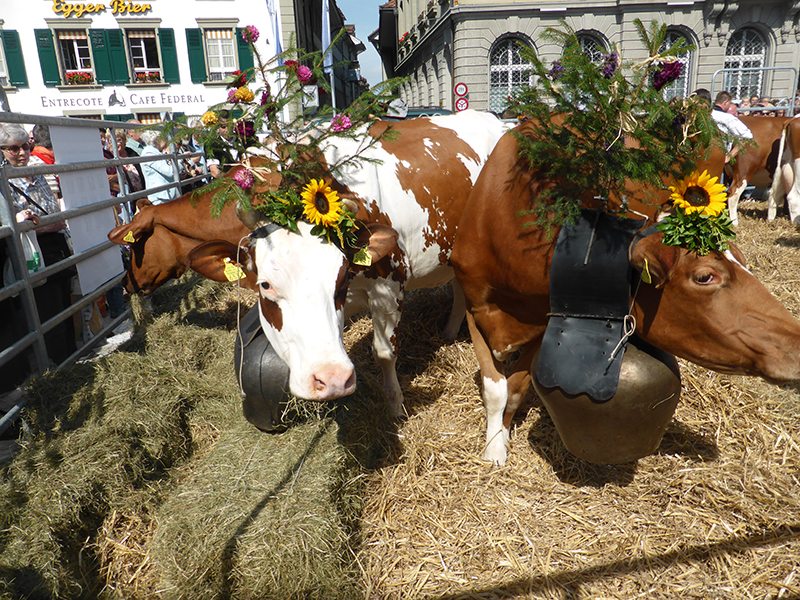 The crowning of the prettiest cow in Bern, Switzerland – Miss Sichlete, 2014

Today, we went to the Sichlete Festival in Bern, the capital city of Switzerland, to see the crowning of the prettiest cow– Miss Sichlete. We really like festivals and particularly ones with a sense of humour despite their being a good reason for it.

This is the beauty pageant to end all beauty pageants, and is taken very seriously with the older people in the crowd, discussing who will win the pageant title. There are active discussions, and I suspect some betting over which of the 14 finalists will take the crown.

The legendary harvest festival “Sichlete” starts at 10am on the “Bundeshausplatz”, the square in front of the federal building in Bern. Bernese farmers bring life to the city with cows, sheep, pigs, goats, horses, music and dance. The highlight is the parade that starts at 1.15pm at the National Equestrian Centre (Nationales Pferdezentrum) and ends at approximately 2am on the “Bundeshausplatz”. 3pm: The most beautiful cow will be crowned Miss Sichlete.

This is the start of “Alpabzug”, which is an Alpine procession with all the cows coming down the mountains.

In the summer months the cows are up in the Alpine pastures and they come down to be put in very comfortable barns for the winter months.

The villagers, and despite being a city these farmers are villagers, dress in traditional costumes and prepare a celebration in Bern for the cows and for their harvest.

The day starts with the Triechel buy cialis get free viagra band, where men and women carry and play very large cowbells, while the alpenhorn players, assist with the commencement of Sichlete.

We watched the Flag throwing, which is a magnificent spectacle and is one of the most solemn and reverent moments of a festival, and must be accompanied by the alpenhorn players to assist their concentration.

We wandered the markets sampling everything that was offered to us from different meats, to cheeses, biscuits and cakes. There was a carnival atmosphere in front of parliament house, and in a very Swiss way the politicians mingled as one with the people.

The highlight of the day is when the cows come over the Kornhausbrucke, the main bridge and through the streets to the Bundersplatz. The cows have the large Triechel bells around their necks, which ring loudly through the valleys, and large floral headpieces on, while the people are dressed in the traditional clothes.

We follow the cows back down to the Bundersplatz, where the local people eagerly inspect each of the contestants and further assess the candidates. A Bernese lady tells us that the only contestant with horns named Quelle is the best, but the judges do not like horns and the cow will not win.

However after a lot of deliberation, the winner is announced and it is …cowbell roll please ..the horned beauty Quelle, Miss Sichlete, 2014 of Bern, Switzerland.

This is an awesome festival to see the crowning of the prettiest cow in Bern, Switzerland – Miss Sichlete.