Stepping Back in Time at The Deerfield Inn, MA 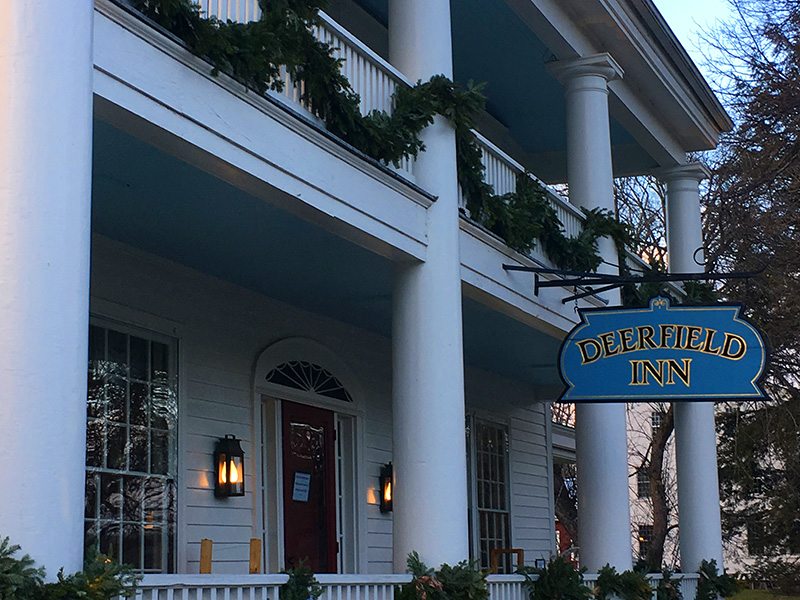 Of course, in the day the town is busier with the tourists who come to explore this very significant country town and the people who work at this museum town. They all seem to gravitate to Champney’s Tavern at the Deerfield Inn for lunch. It is when night falls that all of the locals from the surrounding towns descend on the tavern for dinner, for drinks and freshly shucked oysters. We come to because this becomes the epicentre of the Deerfield community. They come because the food is really very good. The service is excellent and the bar staff are a show in themselves. 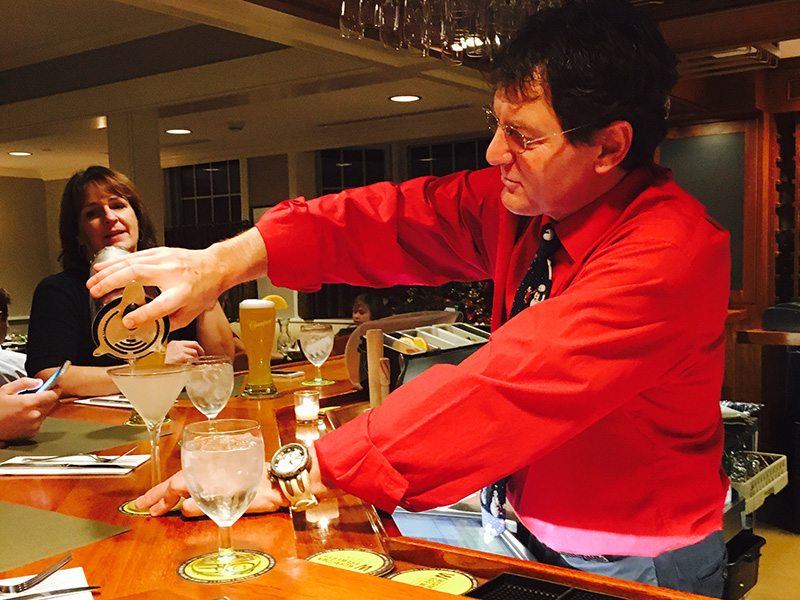 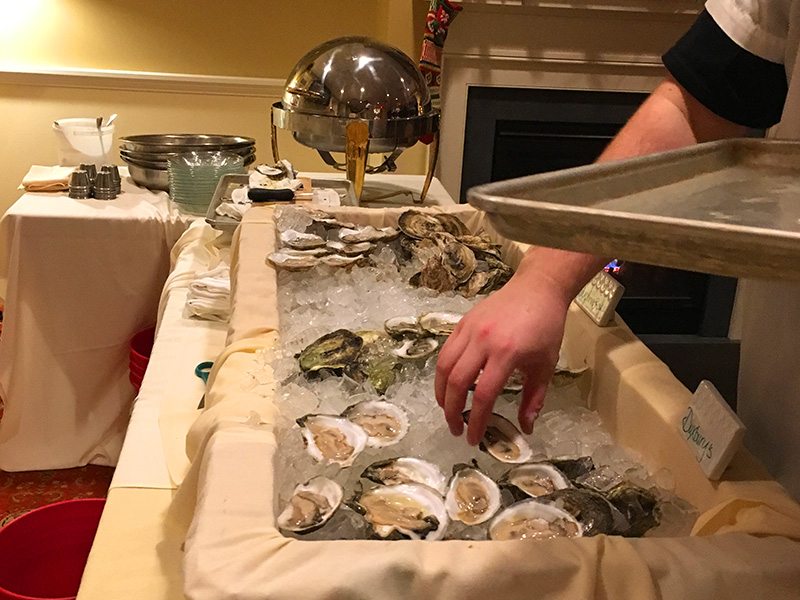 About The Deerfield Inn

The Deerfield Inn is located in the village of Old Deerfield, an historical museum town in Massachusetts. Deerfield is a National Historic Landmark District and is listed on the National Register of Historic Places. It is one of the most popular tourist destinations in America. It is also home to a prestigious educational academy in the US. 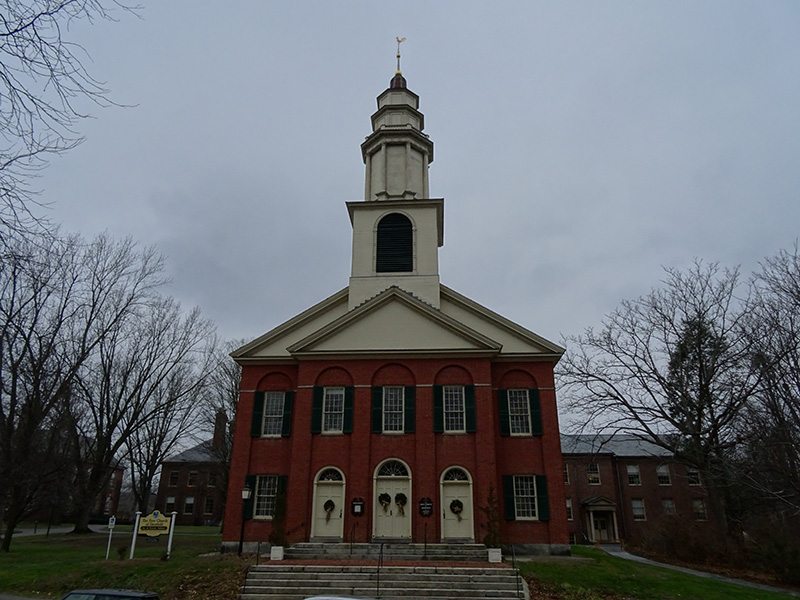 The popularity of Deerfield lies in the history and the artisanal or a simpler, back-to-the-earth travel experiences people are now seeking. The popularity of the Deerfield Inn lies in its welcoming attitude and Champney’s Tavern. 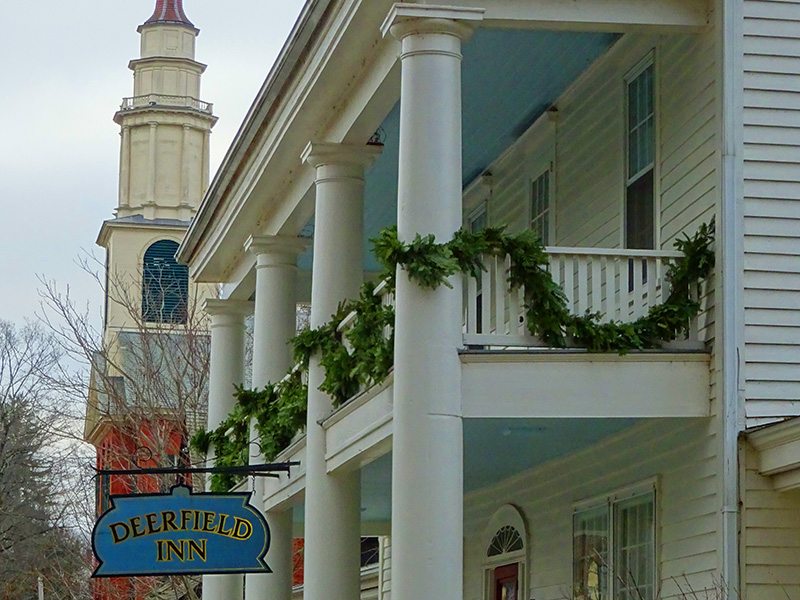 Historic Deerfield is a 330-year-old, mile-long street situated along the Connecticut River in the Pioneer Valley and is home to eleven historic house museums. The indigenous Pocumtuck nation initially inhabited Deerfield.

Where is Deerfield, Massachusetts?

A 2-hour drive from Boston.

Staying at The Deerfield Inn.

The Deerfield Inn is one of the original historic inns of New England. Deerfield Inn was opened as an inn in 1884, amidst a locust plague and despite this, the inn became a favorite stopping place for stagecoaches, and people on horseback who would arrive for the comfort and hospitality of the inn. Guests enjoyed their stay, and that has continued for 131 years, with the Inn still attracting visitors from all corners of the globe. Jane and Karl have been the Innkeepers since 1987. 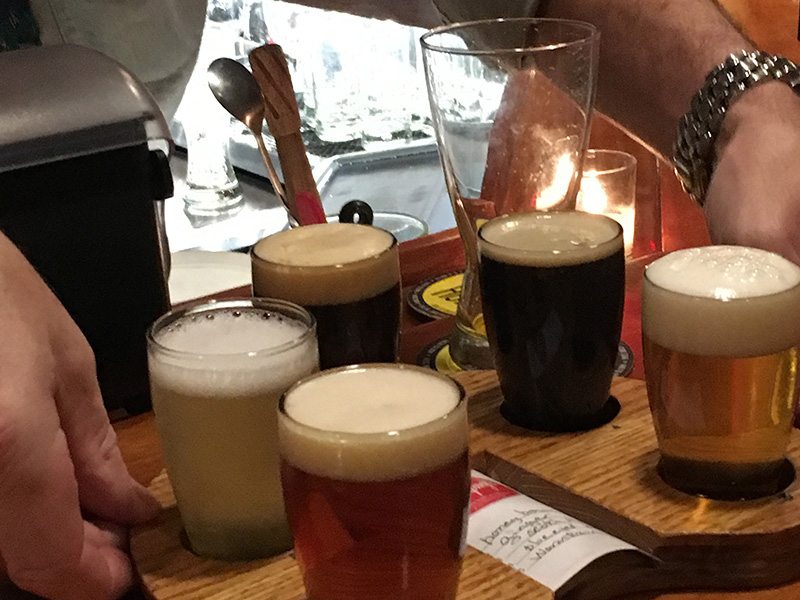 There are 24 rooms in the inn, eleven in the main building, and thirteen in the carriage house. The bedrooms and parlor rooms are all comfortable with cottage-style coziness. There are layers of floral and geometric patterns on casual furniture and quite formal items for that cozy inn feel. 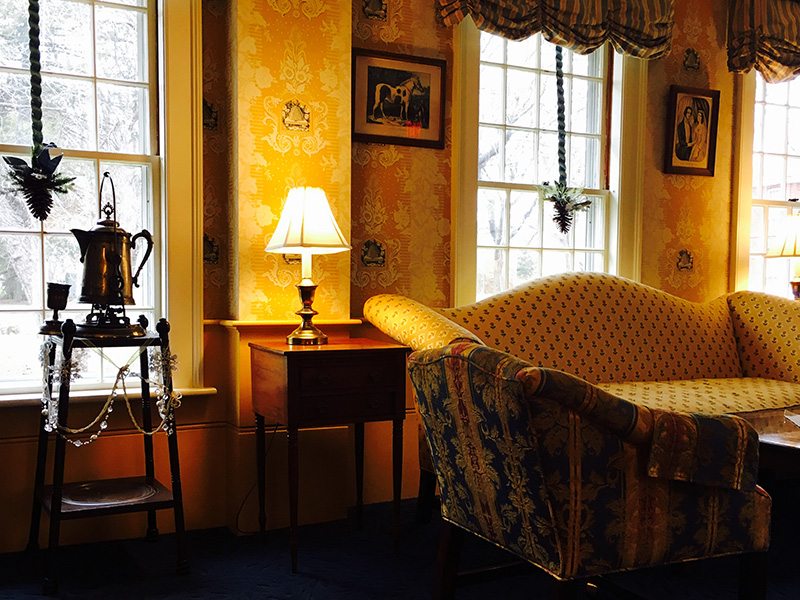 Staying in a Museum Town

If you want to understand the history of New England’s historic villages and countryside, it is a good idea to stay at the Deerfield Inn, with the walking encyclopedia, innkeeper Jane. You will feel as though you are living through the early history of this town; such is her passion and her knowledge. The lady knows each and every inch of Deerfield, and her fervor is infectious.

This is an interactive town that involves the traveler in what once was the unique New England way of life. There are heritage baking days, open hearth cooking demonstrations, letterpress printing as well as horse drawn wagon rides on designated days. The collection of American quilts, in the 1824 Federal Wright House bring enthusiasts from near and far. The Helen Geier Flynt Textile Gallery has one of the most significant collections of early American textiles and costumes in the country. 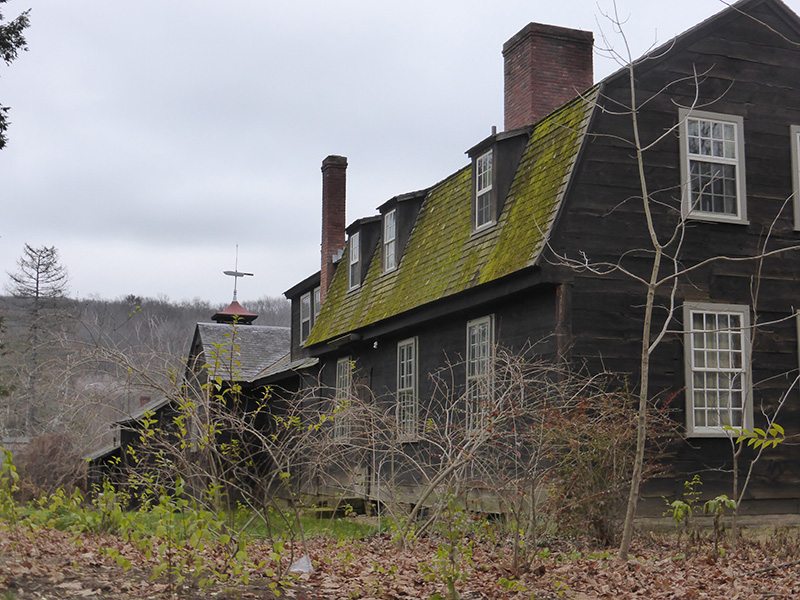 The Ghosts of The Deerfield Inn

Deerfield Inn is full of creaky nooks and crannies, and ghosts. There are two ghosts. Cora, a one-time owner of the inn, and an inveterate sticky beak and Hershel, a former guest of the inn who likes to tug people’s pillows. We didn’t meet them. The inn is, of course, interesting and steeped in history, folklore, and legend.

The history of this museum town is quite overwhelming. It was never an easy existence for the town, but it was the northwestern outpost of civilization in these parts. It was more often than not a bloody history with some consequences that continue to resonate today.

Though the indigenous Pocumtuck nation lived in this area for at least 8,000 years, in the late 17th century, English colonists settled and established it as a town. This was a very fertile area of the Connecticut Valley of Massachusetts and offered the opportunity for good harvests. However, the early relationships between the colonists and the Native Americans were not harmonious. The town was abandoned between 1675 and 1682 when it was again resettled. 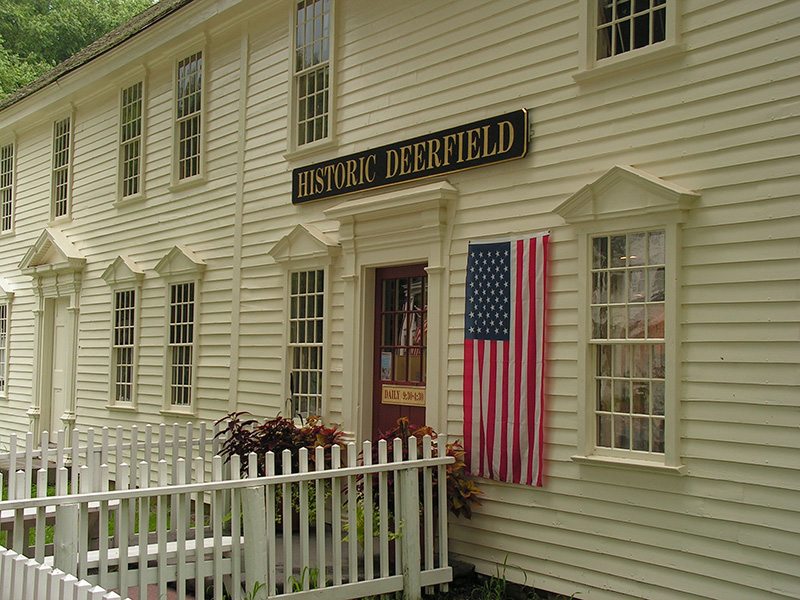 In 1704, a force of about 300 French and Native allies launched a daring raid on the English settlement of Deerfield, Massachusetts. Deerfield according to this source had a population of 275.

47 were killed, and 112 Deerfield men, women, and children were captured and taken on a 300-mile forced march to Canada in harsh winter conditions.

Some of the captives were later rescued and returned to Deerfield, but one-third chose to remain among their French and Native captors.

It remains a year in history that perplexes historians.

After the Revolution things settled down in the town and education became a priority, and this is still of great importance in the state of Massachusetts. 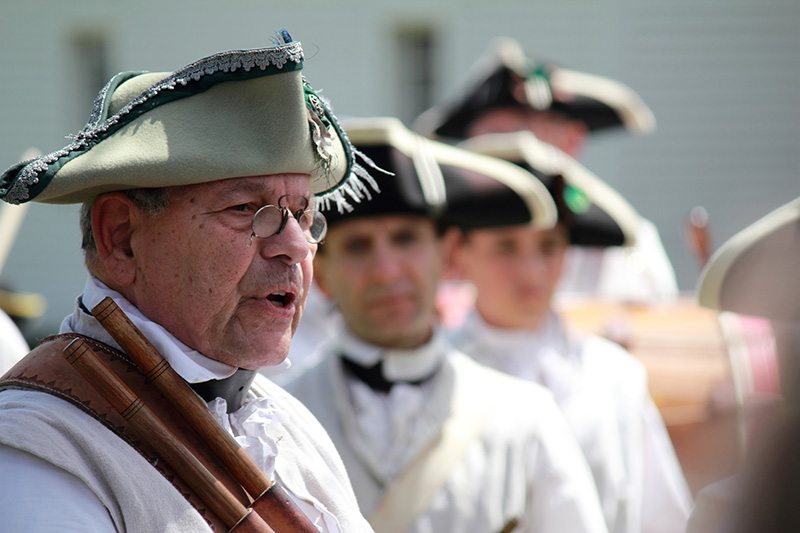 This is the pre-eminent industry of the town along with tourism and in fact superseding it. The Deerfield Academy was established in 1797, and today operates as a very respected co-ed boarding school.

Henry Flynt and his wife, whose son entered Deerfield Academy in 1936, established the Heritage Foundation in 1952, known for preserving the critical past and that is today, Historic Deerfield. 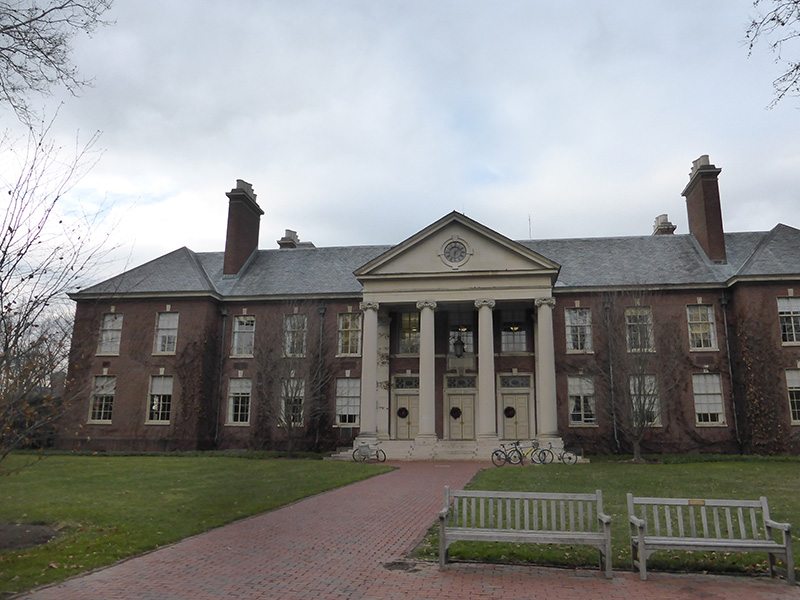 We had the pleasure of exploring the Memorial Hall Museum with the Director, Tim Neumann. This was not only thoroughly enjoyable, but he was able to bring the very convoluted history of this area alive for us. The PVMA is a separate entity to the Historic Deerfield, Inc. and though they do work together there is a difference in approaches. Our knowledge of the Native Americans in New England has grown tremendously, as has our understanding of the Memorial Hall Museum as a collector and interpreter of American material culture. We also learned of the role that women had in this early pioneering life. As exponents of the Arts and Crafts movement, women were able to bring in significant money to the family as many travelers, including the William Hearst family purchased their finely made goods. This return to people working with their hands is what is making Deerfield and PVMA, so on trend. 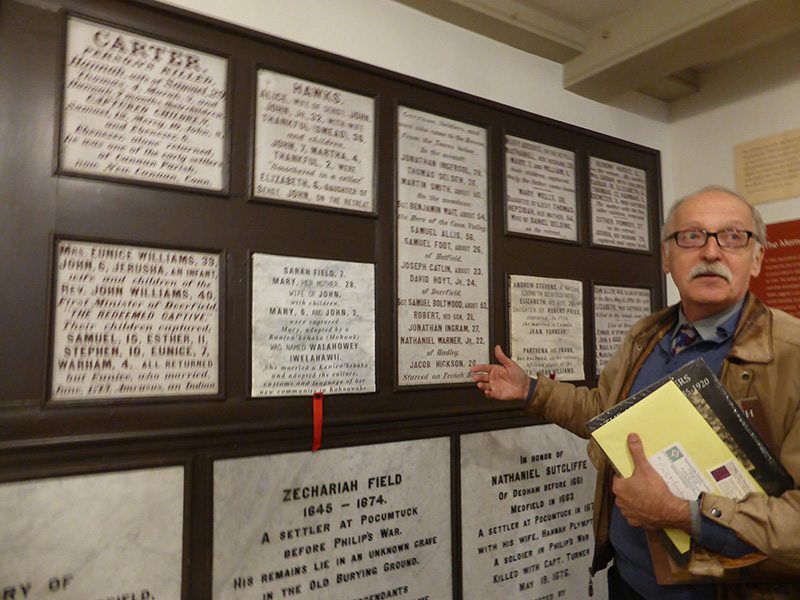 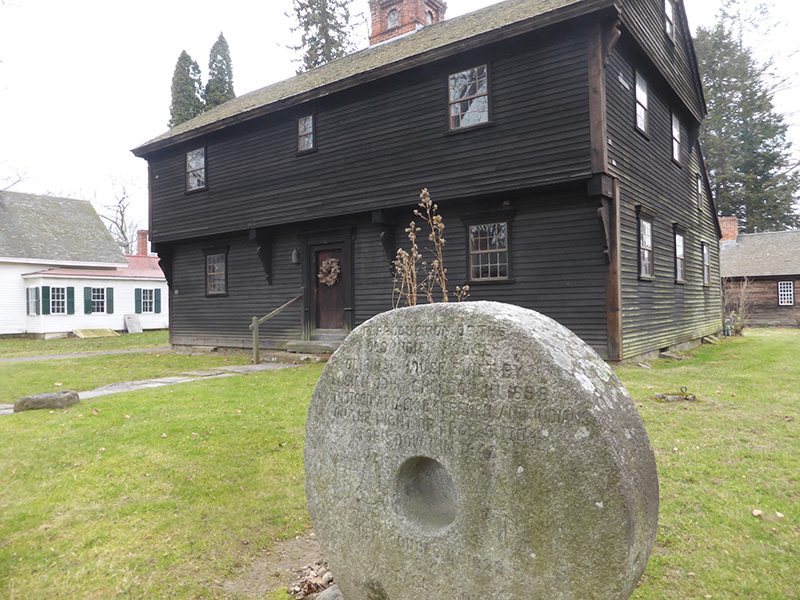 With just one mile to explore, you will be surprised that you do need to allow plenty of time to see what the historic village has to offer. 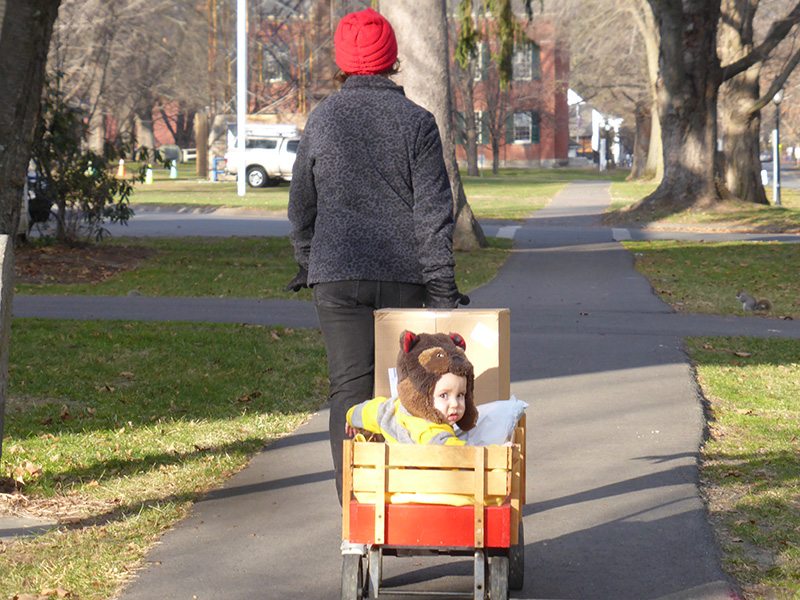 The core tenet of Historic Deerfield is to help people understand the way life used to be and to let them, see “Yankee ingenuity at work in demonstrations of colonial-era trades.”

The historic village tells of the time of The Pocumtucks, the Mohawks, English, French, the enslaved and free Africans, as well as later immigrant groups such as the Polish…that, is how many groups have been a part of this quite messy history and subsequent development.

There are more than 27,000 objects in the Flynt Center for Early New England Life. This is a state-of-the-art museum facility featuring exhibitions and a visible storage area modeled on those at the Metropolitan Museum of Art in New York City.

There are 21,000 volumes of the Henry N. Flynt Library of Historic Deerfield and the Flynt Center for Early New England Life,

c. 1799 has Federal period architecture and neoclassical furnishings that were popular from 1790-1820. 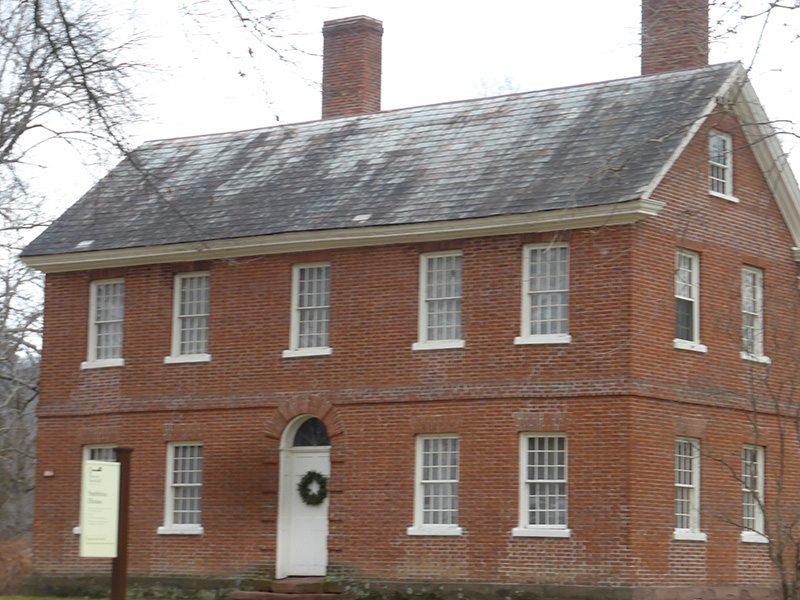 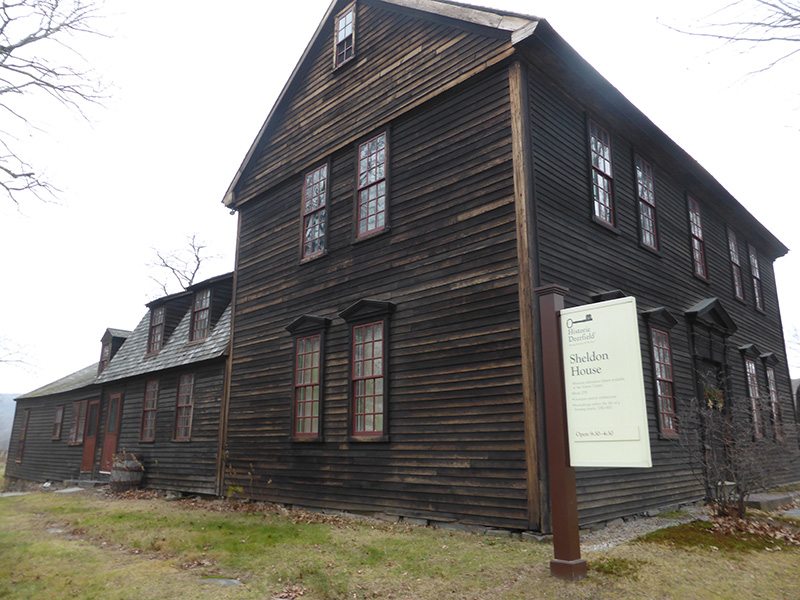 The Channing Blake Footpath shows you exactly why this was sought after fertile land. You can still see working farm and go through the meadows to the Deerfield River. Once again this is signposted to assist you to understand the local geology, natural history, and Native and European presence.

The Cooks’ Garden, is the source of the fresh ingredients used in the museum’s open hearth cooking demonstrations and classes. There are many useful plants commonly that were often found in New England during the 18th and early 19th centuries.

Apprentices’ Workshop at Dwight House shows how things were made by hand long ago.It is here that you can see woodworking, weaving cloth, and ceramics demonstrations. 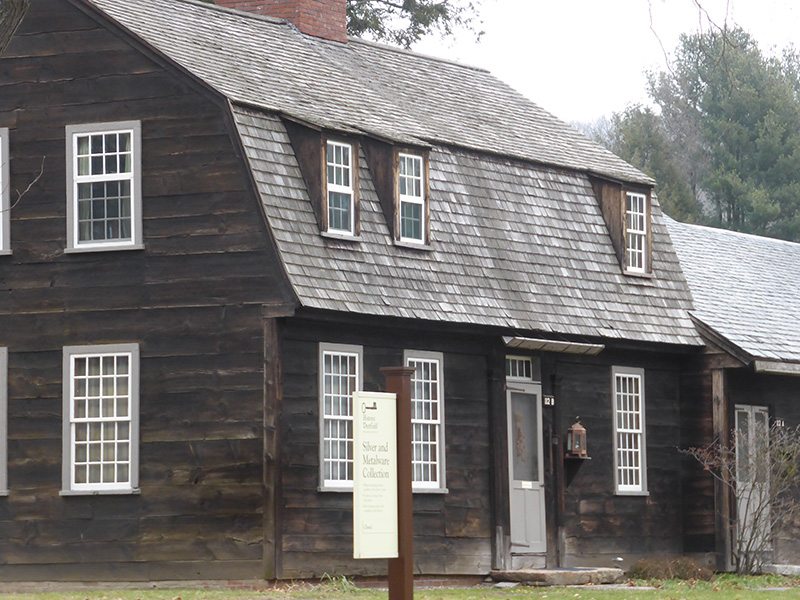 is a seven-room house representing 125 years of Deerfield history in seven rooms, from 1725 to 1850. 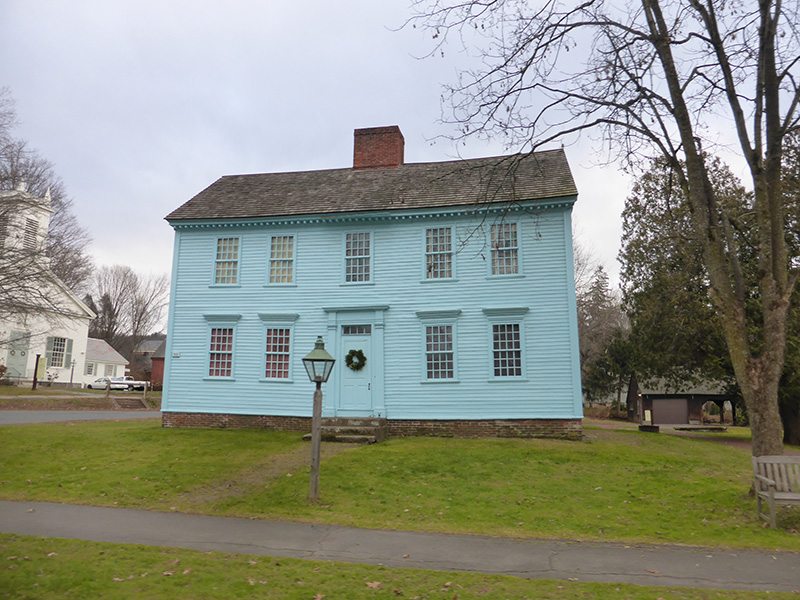 focuses on the Williams family life in the grand Federal mansion they renovated in 1816.

built circa 1750, depicts the Colonial Revival home of Miss C. Alice Baker. This is a great place to visit to understand the Arts and Crafts influence.

Returning to the Inn 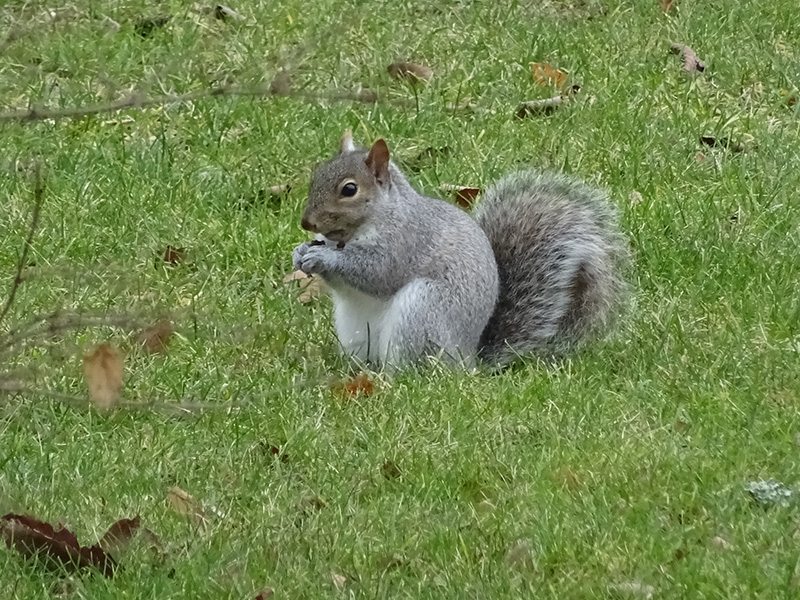 There is a lot to take in and a lot to synthesize, particularly the events of 1704. In saying that, it was an exceptional insight into this Yankee ingenuity and lifestyle. It then became time to debrief back at Champney’s Tavern at The Deerfield Inn, a Distinctive Inn of New England, and to chat with others and compare notes, over an artisanal beer of course.

The Writer’s were the guests of The Deerfield Inn, Distinctive Inns of New England, Pocumtuck Valley Memorial Association and Historic Deerfield.

What to Do in Salem Massachusetts