Why a Weekly Newsletter? 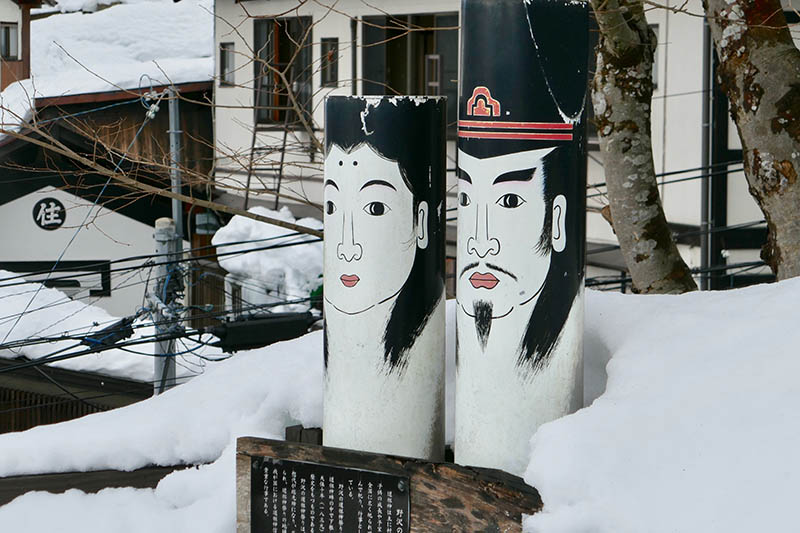 If we remember, we will post this consistently and provide frank accounts of what we do in our business and also dabble a little into what we do personally. So, here is what we did from last Saturday until today, Friday. 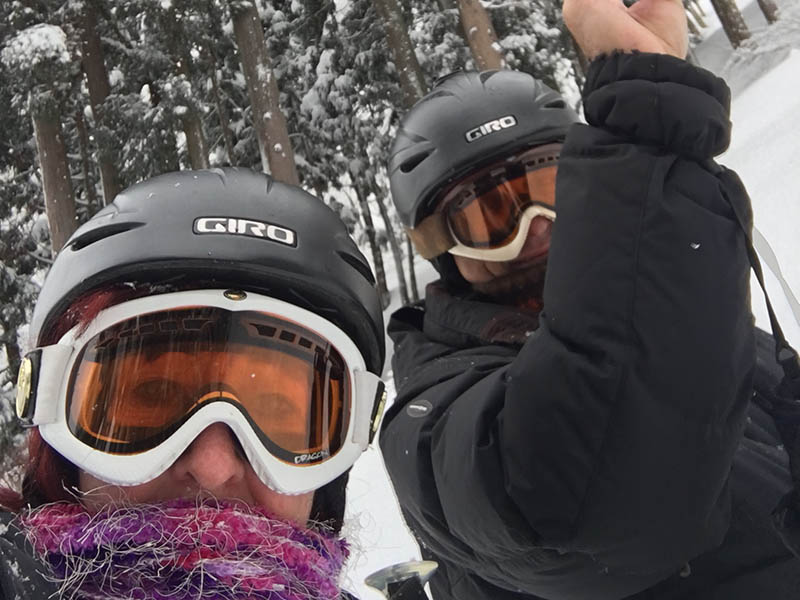 Our 1st Weekly Newsletter from

Where were Gordon and I?

We were finishing up an epic two weeks of skiing in Nozawa Onsen, Japan. This is like our second home, as we ski there every year. We had amazing snow, the village is still fantastic, and we had different friends there who we meet up with at the ski fields. Years ago we met some lovely Dutch men, and we maintain contact and meet with up with one each year in Nozawa.

Gordon is an amazing skier, but I will say, I really stepped up to the plate this year and did very very well. I hooned down the 8km thigh burning home trails, after a day on the slopes.

One of the reasons we love to ski at Nozawa Onsen is that it is also a very traditional village, and has authentic cafes on the slopes, and the locals remember us each year. I think that is a good thing. We ate Japanese curry, ramen noodles etc for lunch and perhaps a little beer, and it was good. 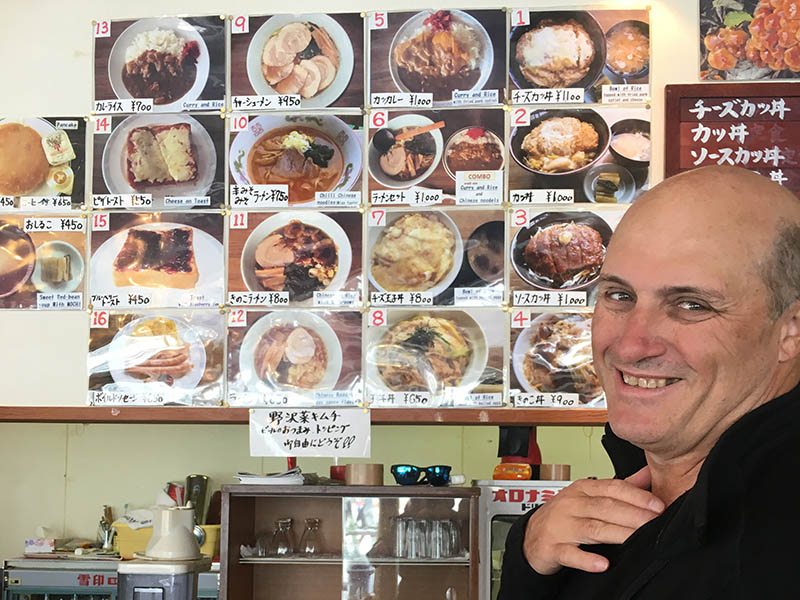 After returning to our lodge where we do stay every year, we went down for our daily onsen. The locals do not particularly shower but use the onsen twice daily. Read about the onsen etiquette here, so you have an idea of how you go about getting naked in Japan. While the onsen is bloody hot, it does repair your body from skiing.

That night, we went to okonomiyaki where there is as much theater from the owner/chef as there is the deliciousness of these Japanese pancakes. Gordon had some hot sake because that is how the restaurant family want you to drink it.

We did publish a post the previous week on the interesting story behind why so many Japanese and in fact Asian’s use the V or peace signs when being photographed. Have a read of it here. 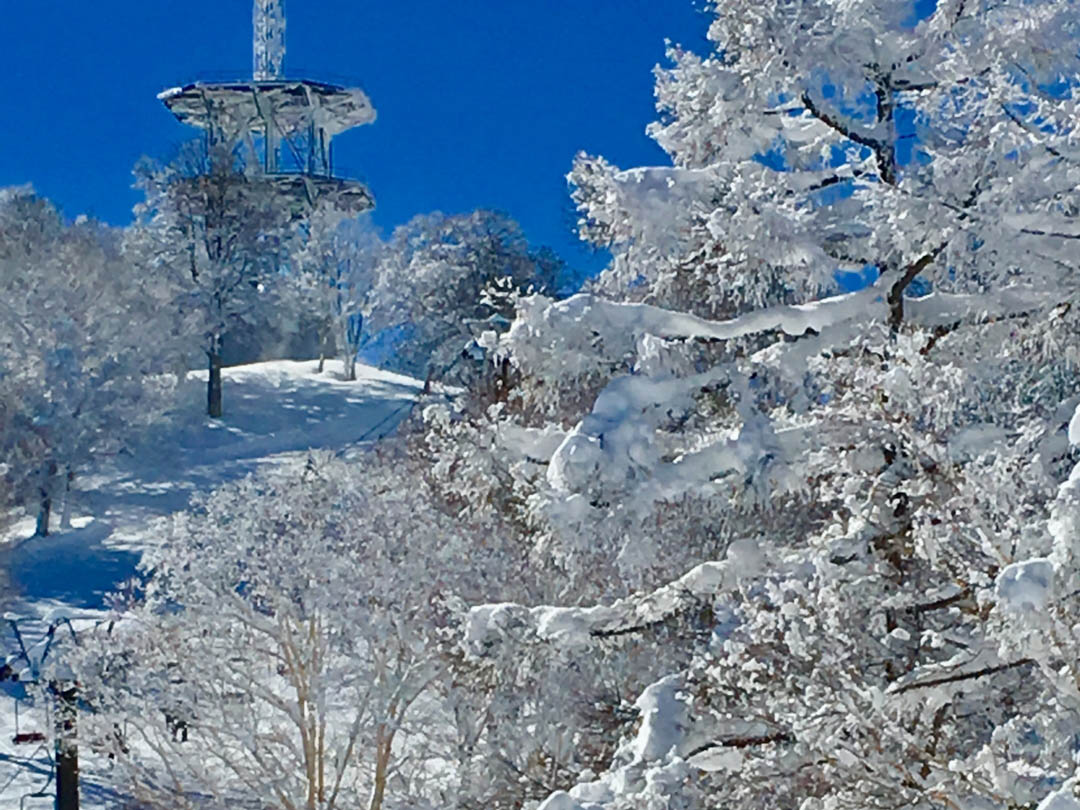 Unfortunately, this was a pretty ordinary day as there was no snow over night but some rain for goodness sake. In saying that, there was a lot of snow with something like a 3-meter base. I am not a fan of whiteouts either, so while Gordon went up and did a couple of runs, I did work on our travel site, and our social media platforms. People must sense when we are having a holiday as we got a lot of work offerings ..some too good to pass on, so it was a work day, which I do enjoy a lot. The thing with travel blogging is that it is a highly competitive marketplace. if you want to stay at the top of your game, then there is no real way to take time off …or I am just an over zealous worker. 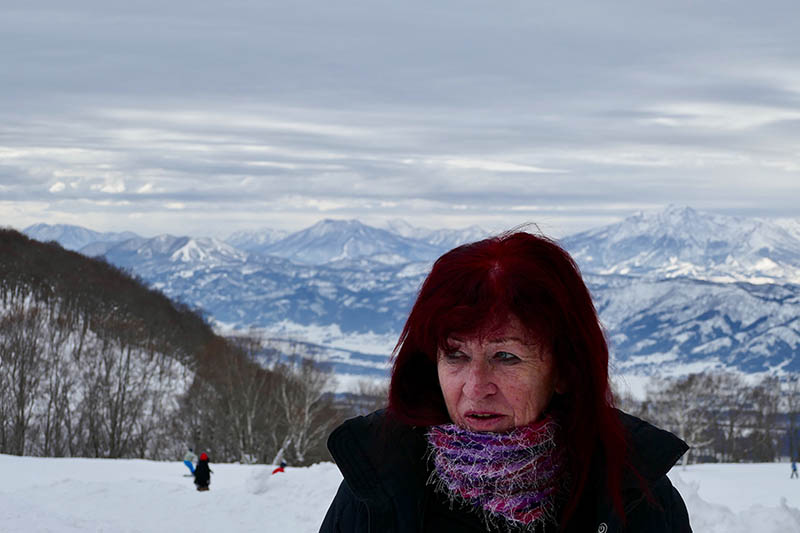 Later in the afternoon we walked into the village and had an Oyaki -steamed bun, from the main street of Nozawa Onsen. Highly addictive and very Oishī (delicious in Japanese, and one word I used a lot)

After our afternoon onsen, we sat with some friends who had returned to the lodge before venturing to the newest café in town – a Mexican place. We had eaten Japanese for two weeks, so didn’t feel too guilty about eating something different. Juntos is very trendy and showed the different people who have discovered our village. We see a lot more Europeans and a lot more Americans in Nozawa Onsen. I was talking with an editor from Hong Kong, and as serendipity does, she employed me on the spot to freelance for her magazine. Could have been the margaritas for her, but we have since been in contact. You just never know … 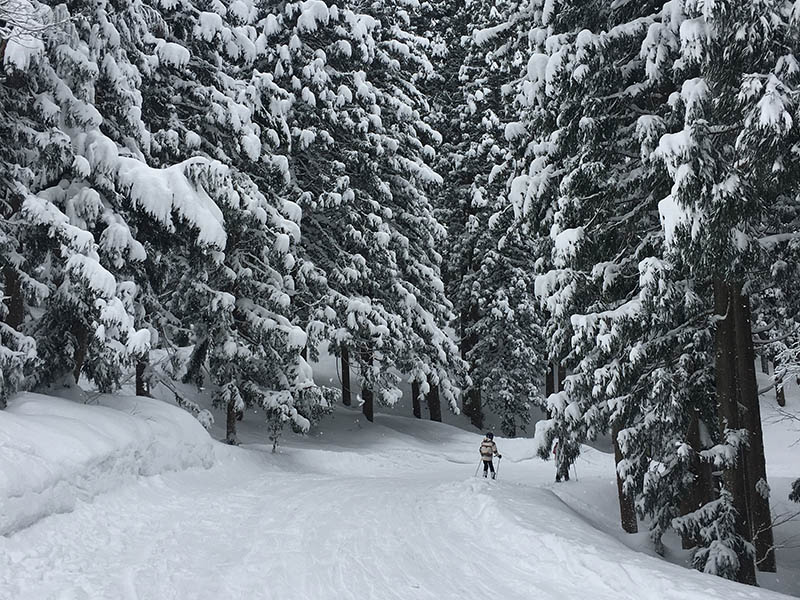 Spent the morning shoving everything into our suitcases. We then had a taxi pick us up from the lodge to drive us to Haneda Airport in Tokyo. This works out at about the same amount as the bullet train or Shinkansen and is very convenient. It is also a lovely way to see more of the countryside during the 5-hour trip.

It was then onto the plane for our 8-hour flight back to Sydney. Sleeping on a plane is my forte.

Touchdown in Sydney at 9.30am. We had been watching the weather at home and knew that it had been revolting heat wave conditions in Australia. But what did we arrive to? The biggest tropical downpour we have seen in a long time…and humidity and back to humidity hair ..just like that. As we walked the 100m from the airport to our taxi, we were drenched, and so was our luggage.

The one hour trip home to Wollongong was pleasant. We were delighted to see our apartment looking so good, and we went into our regular routine. I start the washing and unpacking and Gordon went out to do the hunting and gathering – called grocery shopping. He had been craving a dish I make while we were away, so good wife that I am, I did cook him dinner that night, jet lagged and all.. 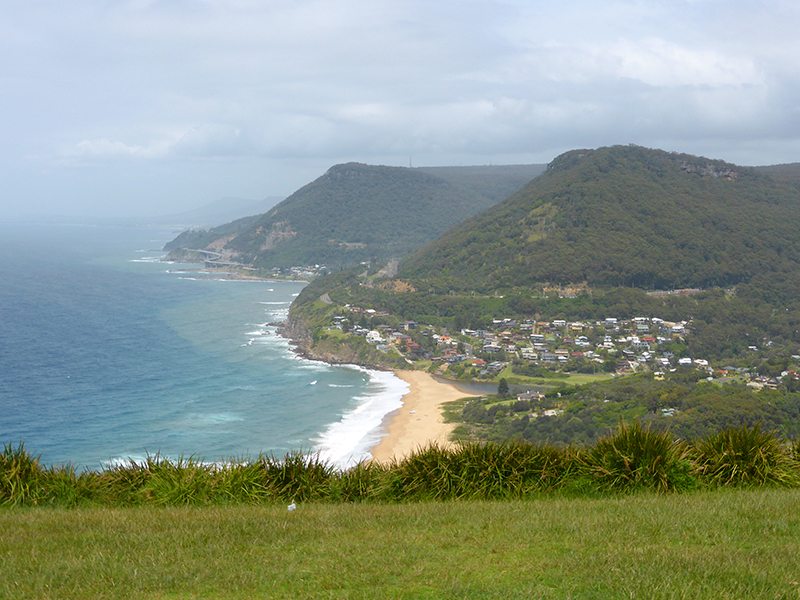 We always totally unpack and wash and dry everything when we return. The trouble is that the dryer does not keep up with the washing machine, so it takes a while. While someone may have had a nap that afternoon,I got into my emails with a fantastic offer from a company, that I will tell you about when the air tickets, etc. are in our hands. We then were offered another trip for a business, but it clashed with another job. I felt that Contented Traveller and Gordon and I were very very popular that day. Four companies paid their invoices too.

Gordon was very happy to see the finicky, fussy and feral brush tailed possum back that night for his fruit, because really that is why he went hunting and gathering, and happy that his mimosa plants and bamboo were still alive.

We published an article on our site, Art made from Recycled Materials in Japan after a walk around the village one day. Read it here. 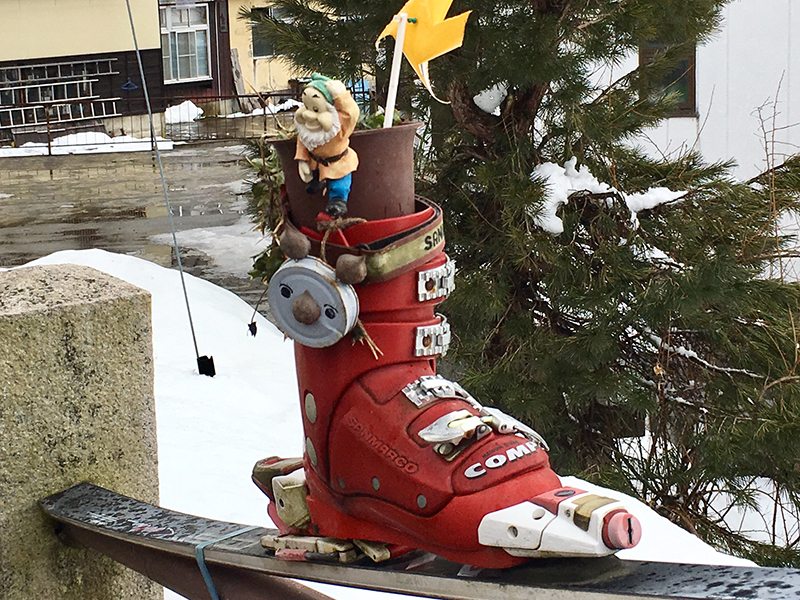 Many of you will have read that my mother became very sick last year, and is now in residential care. She was our 1st port of call on Wednesday morning, and it was a good visit.

I am so lucky that my sister lives nearby. While we were away, my sister and I were selling Mum’s house as she is no longer be able to return. Gordon and I and my siblings, had emptied the house, and we had employed a fabulous real estate agent well before we left. We had paid to have the house styled ..as you do, and had three offers on the table before we left. We had to leave it to my sister to conclude the negotiations, and she did… because she is fantastic. On Wednesday we signed the contracts to sell the family home. Sad? Not really. With Dad having passed away three years ago, and Mum not returning, it was easier. The hardest part had been packing up the house, which was a little emotional.

Our best friend came over late in the afternoon, and we caught up, and had a walk around the harbour. We gave yoga a miss that night, as we were a little tired.

We both worked that evening until about 1 pm because we enjoy running Contented Traveller, and we are back to the normal routine. 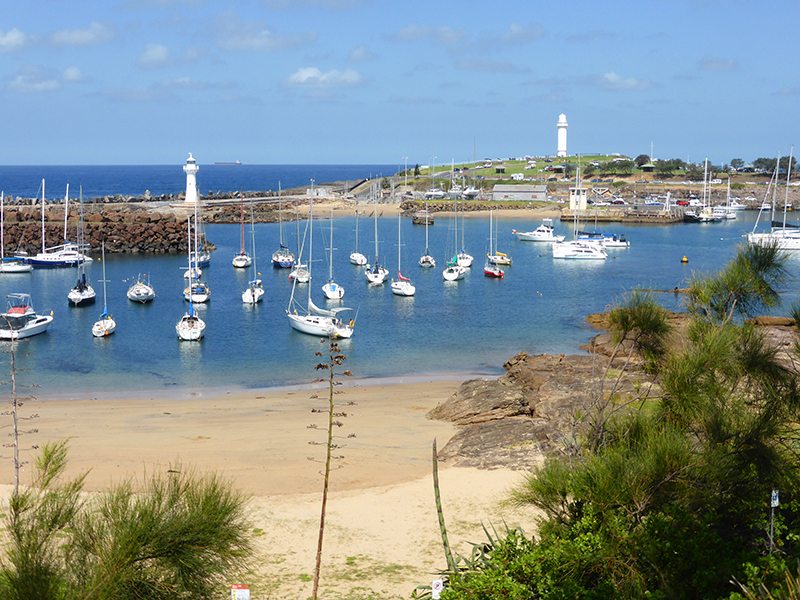 The weather was so much better, and in fact, it was hot. We walked down to the beach to have a coffee, and Gordon was going to have a surf, but because of the previous storms, the surf was like a washing machine. We went and bought Gordon a sports jacket from the invoices that had been paid.

We are off to the TravMedia’s International Media Marketplace later in February and have a few dinners etc., and a new jacket for Gordon was needed.

We spent a lot of time trying to figure out the best way to do this new job, which should take us back to Asia, but nothing is ever easy. We are waiting for another email and hopefully can lock in dates. I am delighted to say that our editorial calendar is filling up quickly.

We had told our friends we would go to a Trivia Night with them, and we came in a creditable 2nd last place, but there were only 4 points in it. Apparently, the Labor Party in Australia introduced the Knowledge Nation policy, subsequently known as the Noodle Nation. We still would have come near the bottom Gordon!

After we had returned, we got stuck back into work. 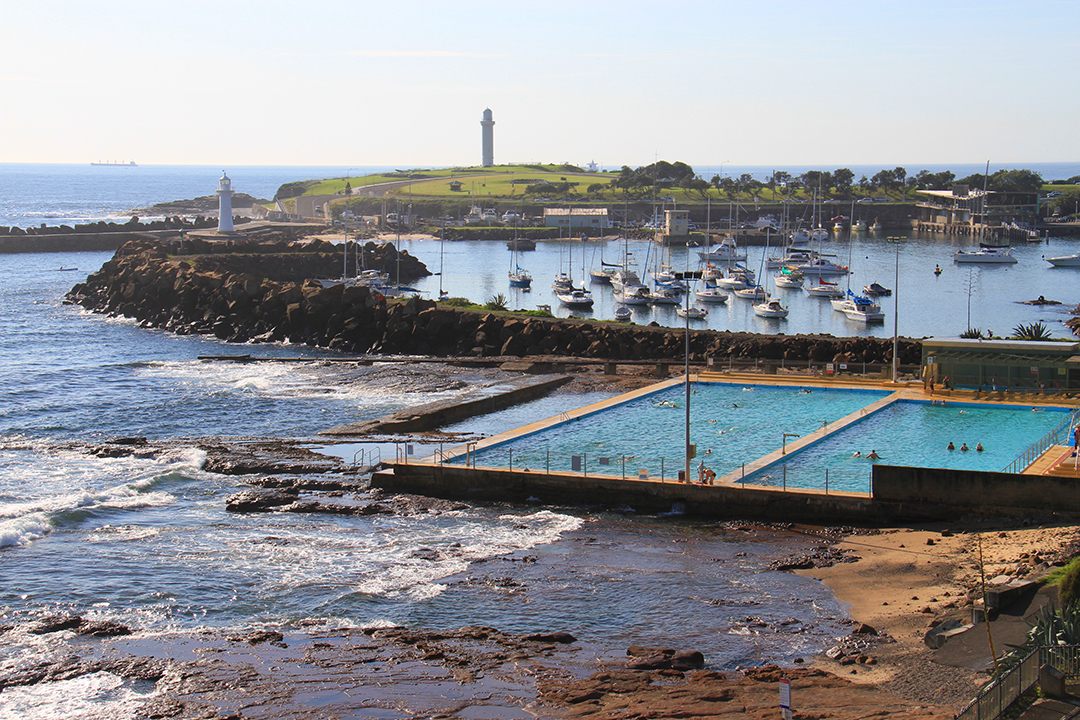 A regular work routine, where I start before Gordon because this is a good time for me… to work undisturbed. Gordon got an earlier wake-up call as the temperature was already at 36 degrees at 7.30am, and he needed to wash the outside windows as we get a lot of sea spray from the beach. We skipped breakfast and went straight to the Thai restaurant for lunch. At 39 degrees it is a little warm writing this, but the beach breeze makes it easier.

After I finish this first Weekly Newsletter from Contented Traveller, I will cook, because it is soothing yet totally ridiculous in this heat. I just thought …it’s Friday night …so maybe we might walk over to a lovely little bar on the beach.

It was an epic week of fun, food, friends and work opportunities. Let us hope this continues. 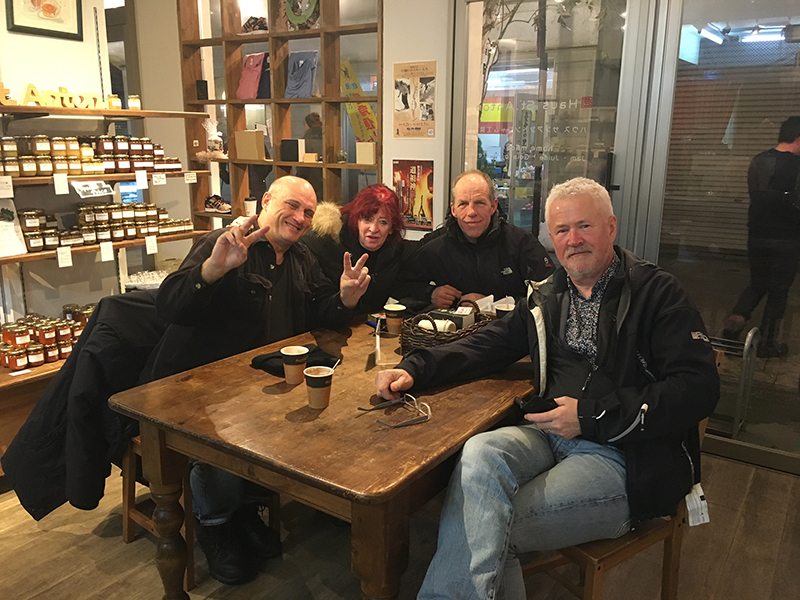 Now, what do you think of this for a weekly idea? Do you want to keep reading our Weekly Newsletter from Contented Traveller? You guys tell us.