The Paris Metro is a Tourist Destination in Itself 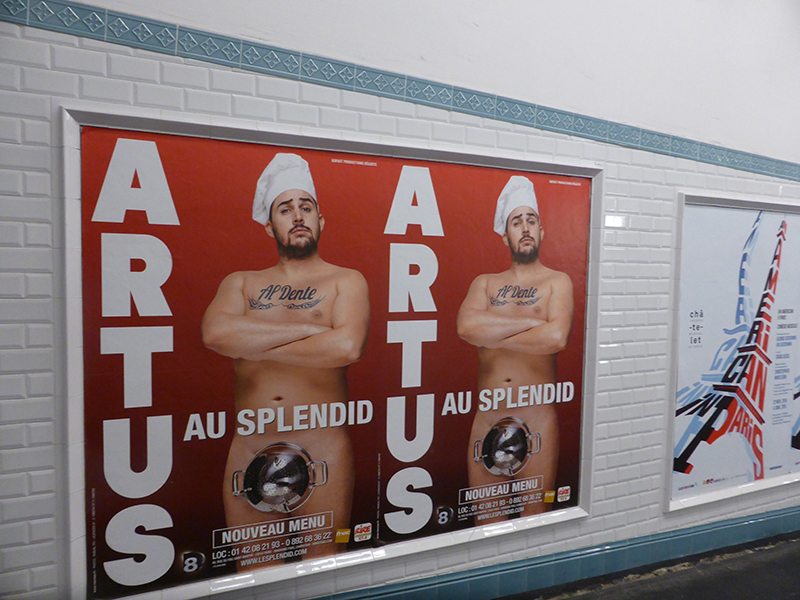 The Paris Metro is a Tourist Destination in Itself.

This is a highly efficient transport system, but more than that it is an experience seeing the differently themed stations.

When in Paris, the best way of getting around the city is by using the excellent and very efficient Metro.

Traveling on the Paris Metro Lines is a sheer pleasure in my opinion. Not only do the trains run on time, but also many of the stations are a pleasure to look at. There is a sense of humor that many stations show and a sense of history in others. In one of the art capitals of the world and with people who I suspect have a good sense of humor; it is hardly surprising that the Metro or the subway reflects this. 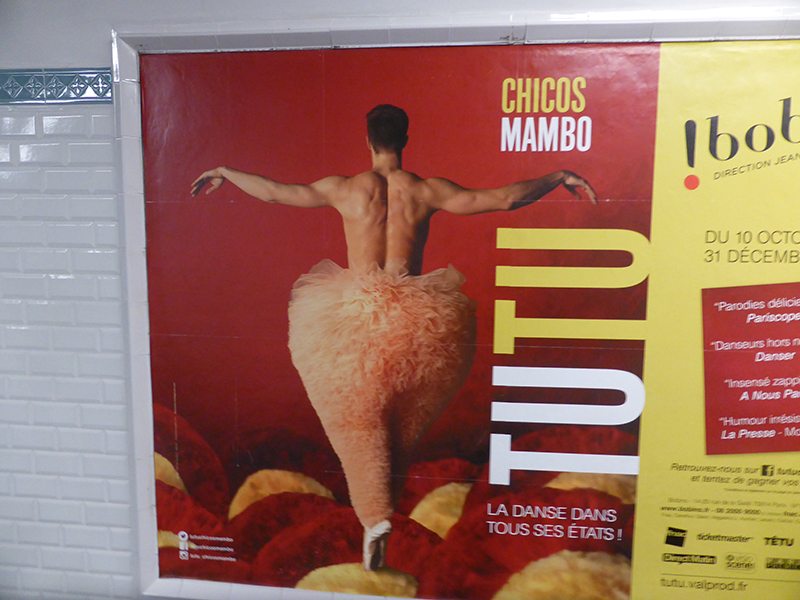 The logistics of the Paris Metro

The Paris Metro lines are identified by numbers. Lines 1 – 14 run mostly within the city limits. The RER lines are identified by letters, Lines A, B, and C and operate from the city center to the suburbs and to the airports. Every station within the Paris Metro has a map and also has a clock specifying that the next train is coming in 3 minutes, 2 minutes. The stations are all very well signposted. The direction of the train is shown by the name of the final station on the line. So if you are going to see the Moulin Rouge or to the Montmartre area and want to get out at Blanche you will need to go on Line 2, which if i recall correctly has the end station of Victor Hugo.

If you want to go outside of the city limits, which are defined as Zones 1 and 2, you will need to take the REC. If you go to the airport Airport Charles de Gaulle then this is Zone 5 or to Versailles on RER C, which is Zone 4. 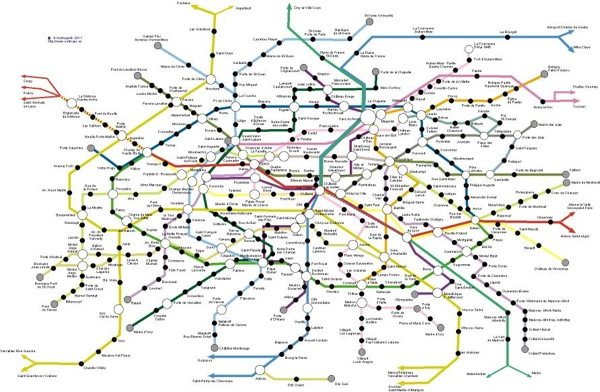 Get a Paris Pass

Helpful Information
The Paris Metro Pass is a travel card pass that gives you unlimited use of the Metro, buses, as well as all the public transport services. It is the easiest way to get around Paris.

The reality of using the Paris Metro

1. It is pretty tricky, so you need to figure it out, so allow time to get your head around the system

2. Walk and walk and walk – up and down stairs and around and around following the signs religiously. ADD time to your estimated trip. While the trains run like clockwork, you will find it does take a while to get to your platform.

3. However, the walk is totally worth it as the stations in the Metro are a tourist attraction in their own right.

4. We found traveling on the Metro to be totally safe day and night. Of course, you do not leave your bag on the seat or anything but you wouldn’t anyway. There are a lot of announcements about pickpockets, and that is a reminder to be alert. We did meet some people who had been robbed the day before so it pays to make sure that anything you are carrying is as inaccessible as possible.

Unfortunately be aware of children and mothers with prams. If you see point 5, you will know that it requires a lot of effort to get your pram to the platform. Gordon has zippered pockets on the front of his short where the money is. I have nothing in my bag particularly, yet if I felt a little uneasy, my prize possession – my phone☺ went into my bra.

5. One last and very disappointing aspect is that the Paris Metro IS NOT disabled friendly and unless you are very good at navigating stairs with a pram, not really very child-friendly either.

Why The Paris Metro is a Tourist Destination

Art and Paris go hand in hand and as you will be using the Metro, when you are not walking, you will find that if you look – that many stations are decorated and themed according to where they are. Not only are the stations intriguing, but also the posters adorning the walls keep you very entertained on your very brief wait.

While not all people like it, there is also entertainment on the trains at times. At times, it is sad as poorer people sing or give a speech, but at other times it is just people having a bit of fun. The best we saw was a man on a piano accordion and a younger man rapping to it. I was shocked at how well a piano accordion and rap goes together, so if any rap artists release a piano accordion backed song, then I am taking the credit .. and some of your royalties.

This station has a glass canopy over the entrance and not any old glass canopy, but as befits its title, one that has colored baubles that glisten in the sun. It is bling city and then you enter and the walls are covered in graffiti, which adds totally to the feel of the station. Hector Guimard, who was responsible for the art nouveau stations all over the city, designed the station. 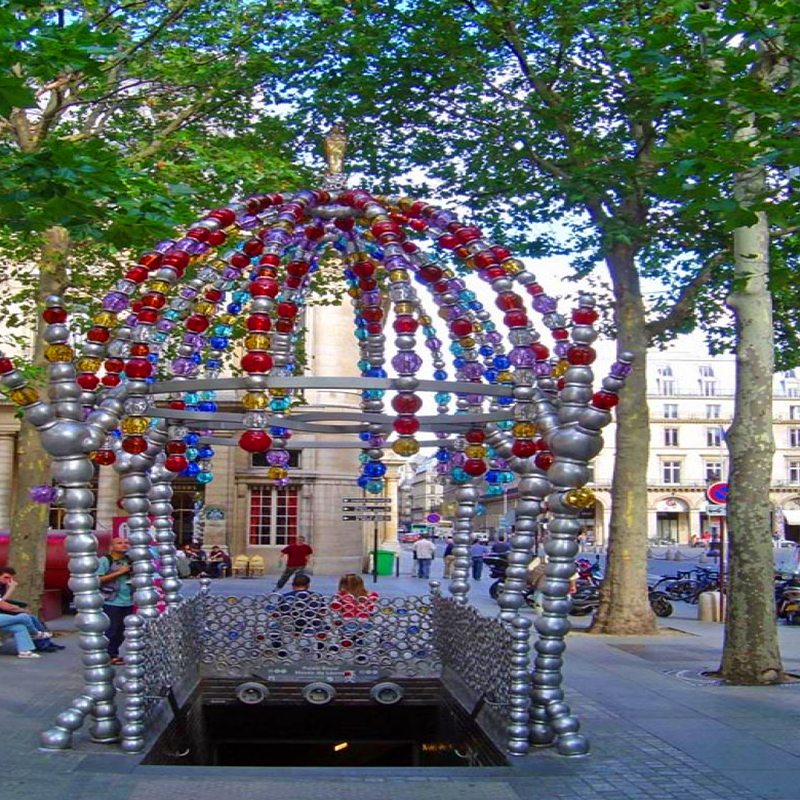 The artwork on the walls of the line 1 platform is a representation of the history of this area. The Bastille decorations concentrate on key moments of the French revolution. 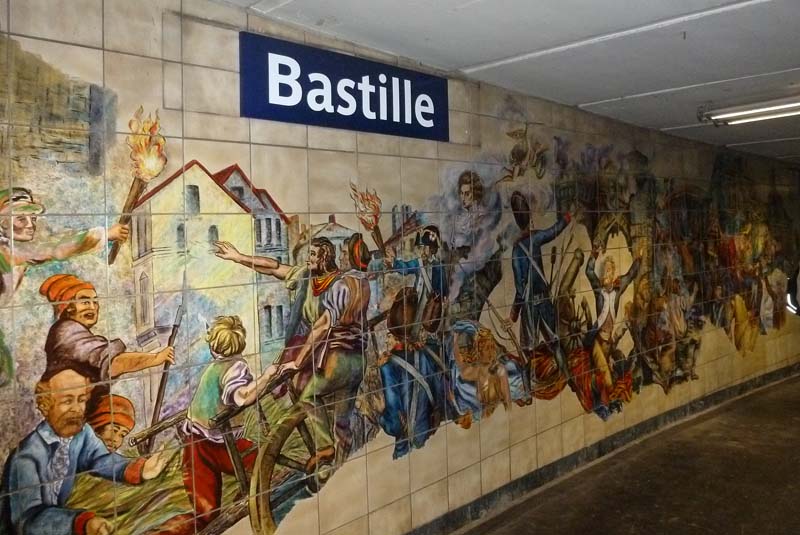 This one took a bit of detective work to figure out. There are tiled letters all along the platform. Each tile has a single letter, and this project was the first of an international network for Human Rights started in Paris by the artist Françoise Schein. The walls of the station on the line 12 were totally covered in 1989, by Françoise Schein, with the text of the Declaration of the Rights of Man. 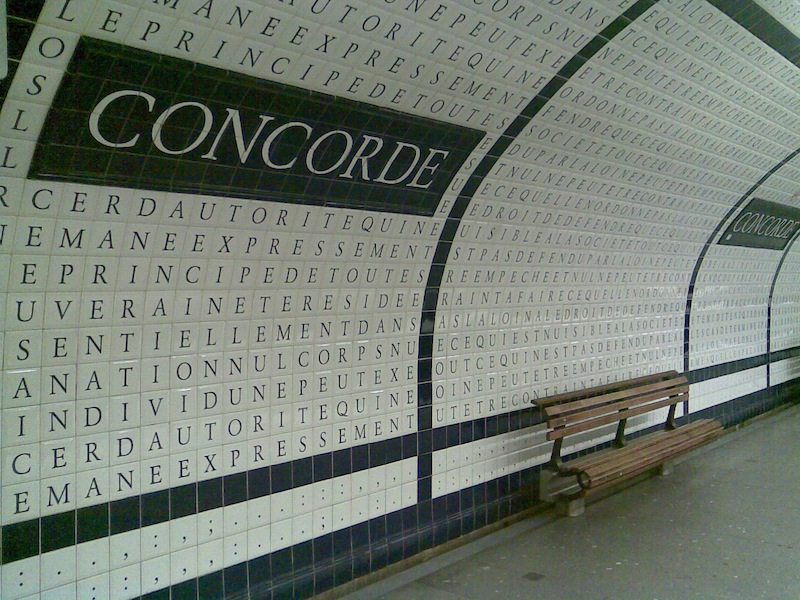 The art nouveau entrance does it straight away. The Cité station is the only one on the Île de la Cité, the island where the stunning Notre Dame is located. As Paris is the city of Light you will also find really beautiful old fashioned street lights along the track. 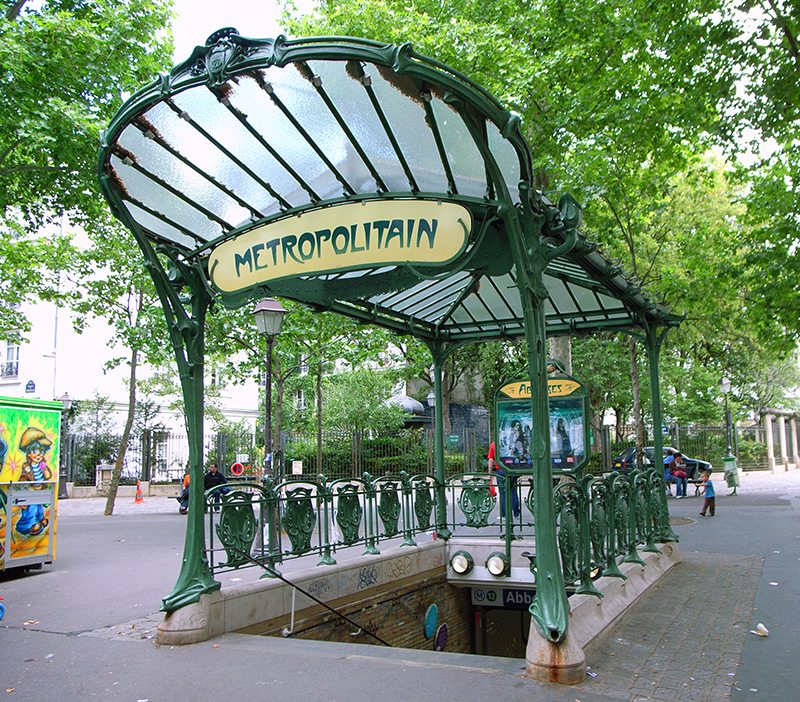 We were not expecting this one. We thought we had landed inside a submarine or something. The station is copper with portholes, and it does make you go WTF. This station is named after the Museum of Arts and Craft located nearby. 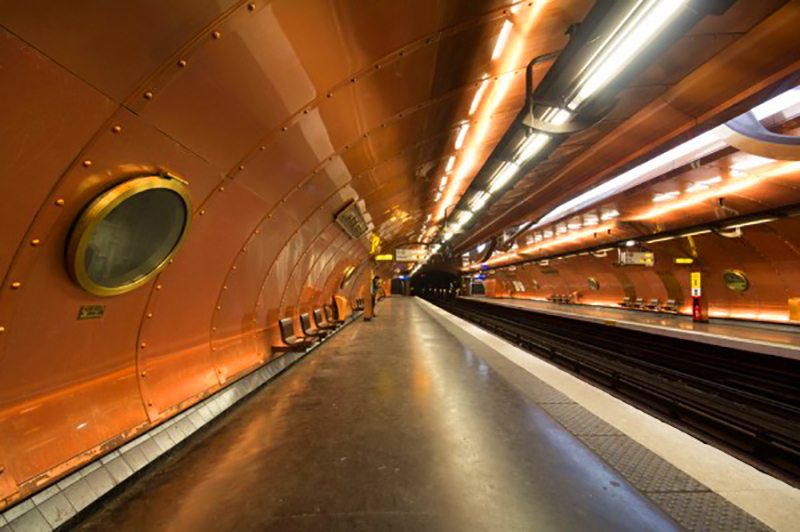 The Tuileries is on Line 1 and was redecorated for the centenary of the Paris Metro in 2000. It showcases developments during the twentieth century. 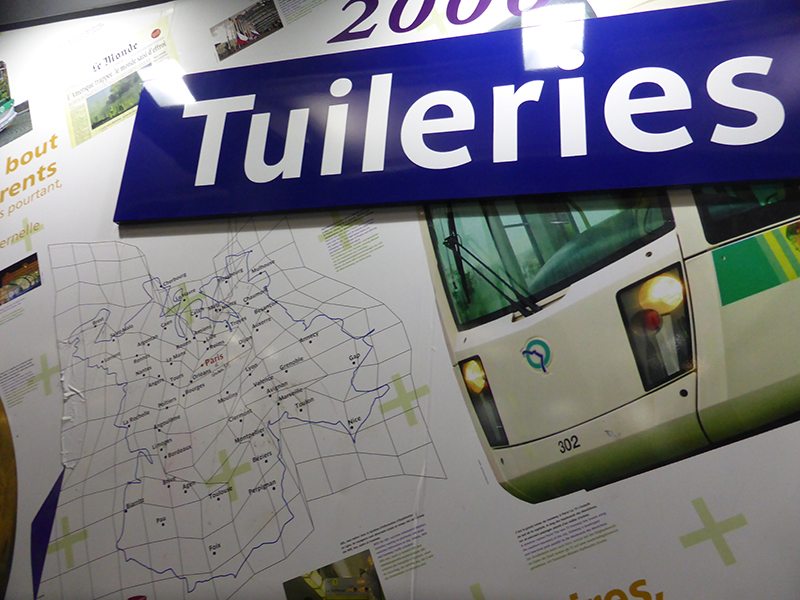 Is done in a style to resemble the surrounding attractions like the National romantic Arts School and Le Grand Rex Theatre. It is meant and is playful. 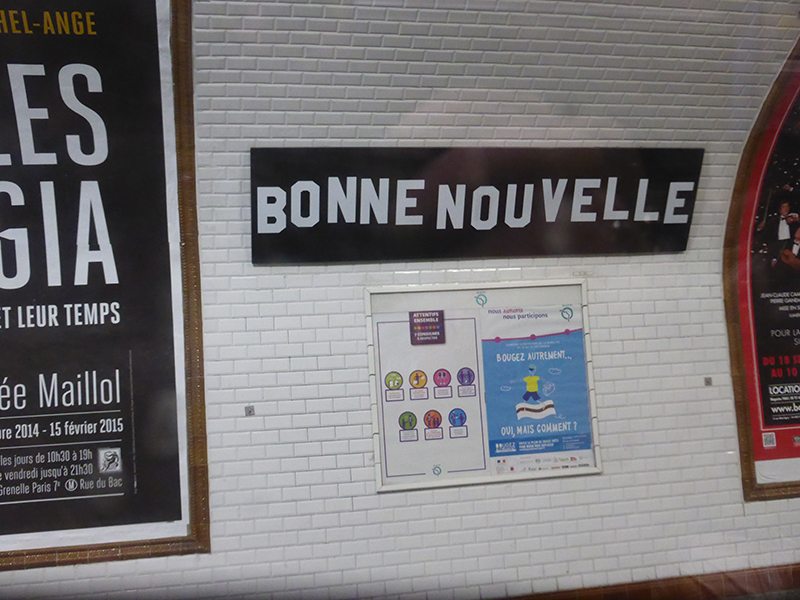 Using the Paris Metro is a given, and it is a highly efficient system. See the different stations, and their art and even the posters around the station is an amazing and enjoyable experience. The Paris Metro is a Tourist Destination in Itself. 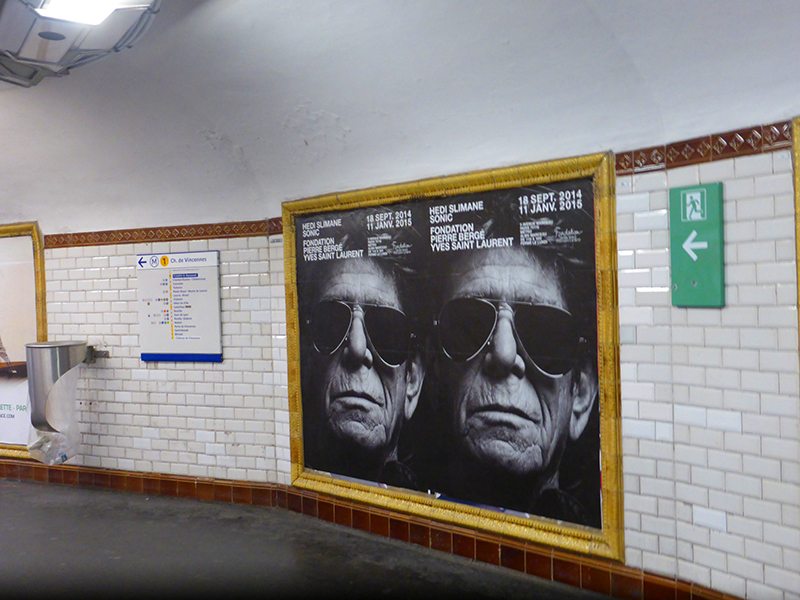