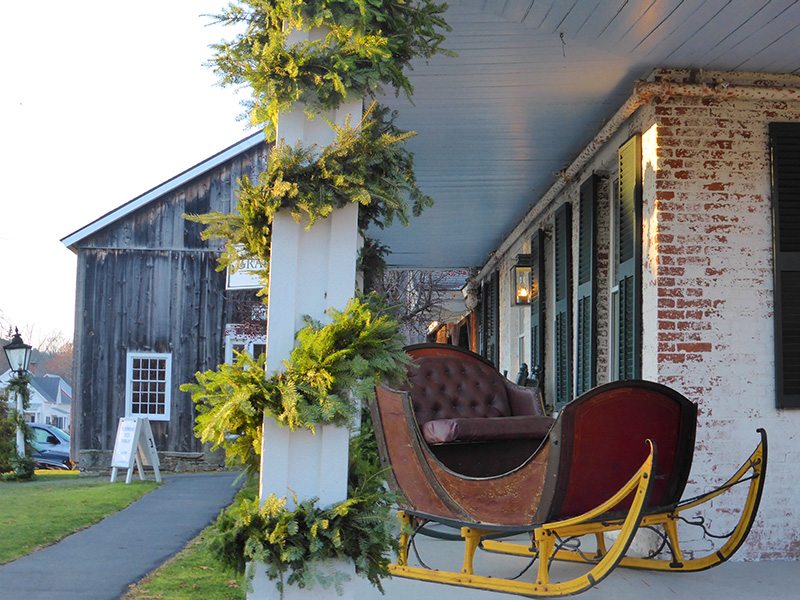 Since 1801, the Grafton Inn Vermont has hosted several U.S. Presidents and literary legends such as Nathaniel Hawthorne, Ralph Waldo Emerson, Henry David Thoreau and Rudyard Kipling….and now us, though I think we may be the odd ones out somehow.

John Donne’s words, “Seasons of mists and mellow fruitfulness”, played through my head as we drove into the deep forests of Vermont and to the village of Grafton. They seemed to be the appropriate words for the lovely surroundings. 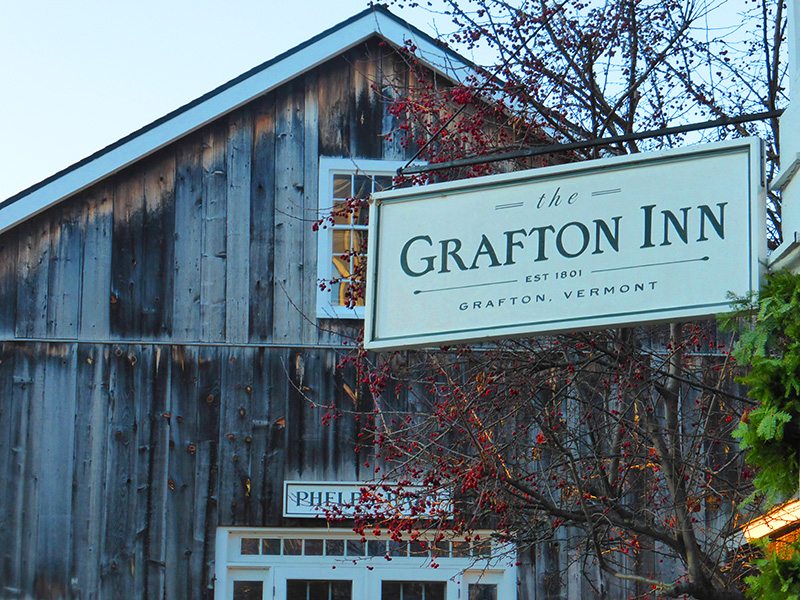 Grafton is without doubt one of the prettiest villages in Vermont, and indeed the USA and Grafton Inn is the show stopper in this village. I probably wasn’t expecting the village to be so beautiful, and we are not seeing it during the famous Fall season, nor in the magic time when the snow blankets the village. No, we were in Grafton in an unseasonally warm, for Vermont, early December. 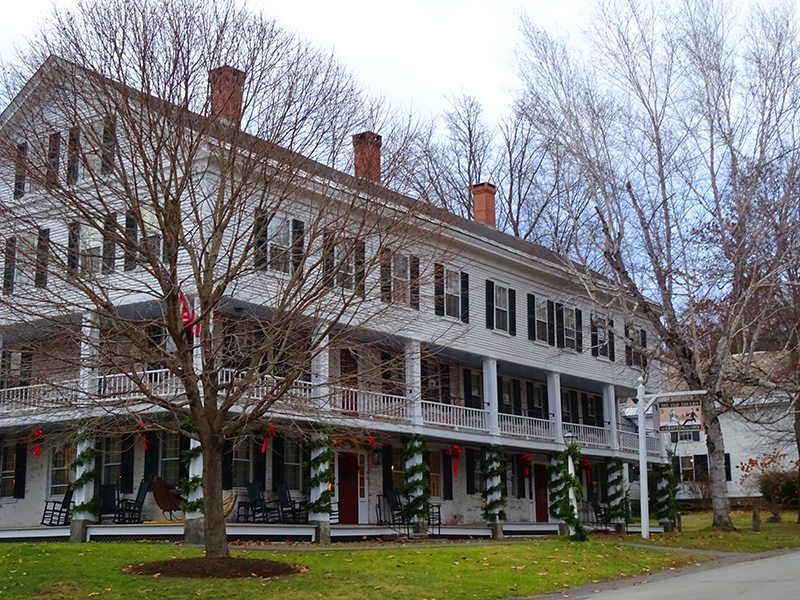 Did it matter that it was not dressed in oranges and reds, or pristine in white, or indeed lush in green? Well no it didn’t, because this is one of those beautiful villages all year round. This a movie set location with the bright red barns, the steepled churches and the whiter than white houses, with the streets lined with lanterns and not a power line to be seen. With the backdrop of the forests, the romantic covered bridges over the babbling brooks, you can see why Rudyard Kipling, lay his weary head down at the Grafton Inn. 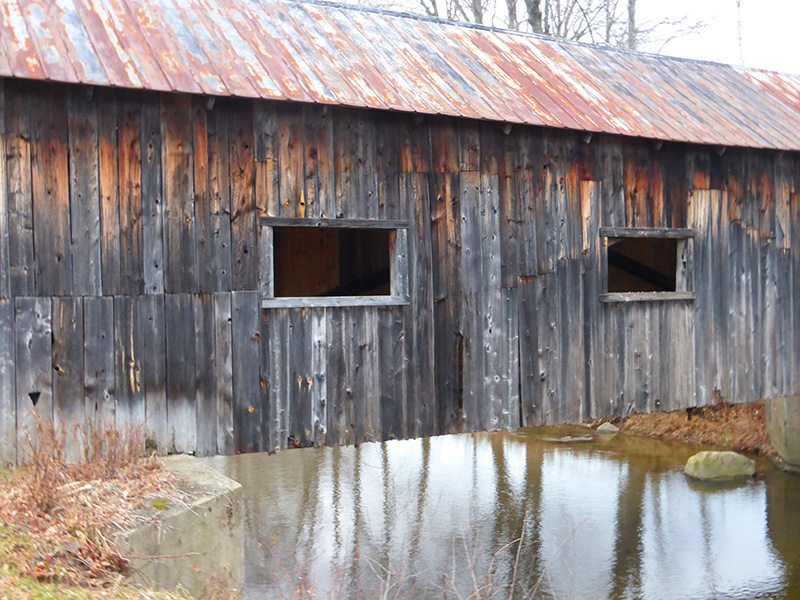 Grafton Inn is the oldest operational Inn, commencing business in 1801. It was a one-time stagecoach stop. Apparently I am not the only one who seems smitten with Grafton as USA Weekend has proclaimed Grafton as “One of America’s Top Ten most beautiful destinations.”

Why is called Grafton?

The town was founded as Thomlinson, but renaming rights were auctioned in 1791. The highest bidder, reportedly offered “five dollars and a jug of rum,” changing the name to Grafton after his home town of Grafton, Massachusetts.

Why Grafton is a such a well-preserved village.

It is a curious village in that the non-profit Windham Foundation, has preserved this village of Grafton in Vermont. It is not easy being a small village in a large state and Grafton has had its fair shares of ups and downs over the years.

The Foundation owns, runs and preserves the Grafton Inn. And a very good job they are doing. This is just one of the many places it owns and preserves and runs in this village, keeping the real spirit of Vermont alive for all to enjoy.

The Grafton Inn has 45 individually appointed rooms with period antiques, including seven suites with private baths, and sitting areas. Four rental houses, each sleeping six to 10 people, offer separate living areas, kitchens and baths. Each property and each room are totally unique. 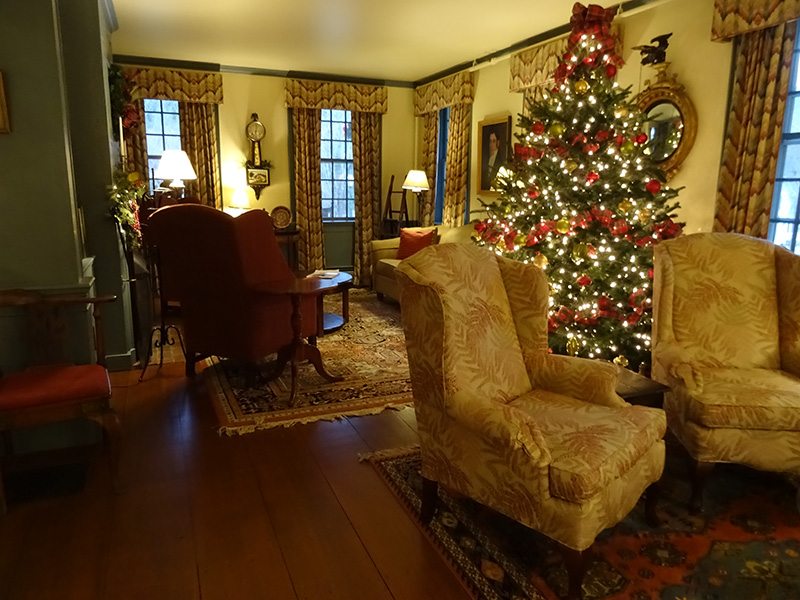 So who is the Windham Foundation?

This is an interesting story.

Dean Mathey was an investment banker from Princeton, New Jersey, with long family ties to Grafton. He loved the rural beauty, peacefulness and nature that is Grafton. It concerned him greatly that the village that he loved was falling into disrepair, so he decided to do something about it.
As an aside, he also happened to have played tennis at Wimbledon in the early 1920’s.

He established the Windham Foundation to preserve the integrity of Grafton village, and with the vision that many of the small villages in Vermont should be preserved.

In effect, Vermont is a very big and beautiful national park, with many small villages and hamlets. There are some cities, of course, but when you think about it, the capital of Vermont, Montpelier has only 7,775 people. Burlington, the largest city, has a population of 42,000 so you can see that the remainder of the 626,562 people in this green mountain state are in these small villages. Sustaining these villages is no small feat. 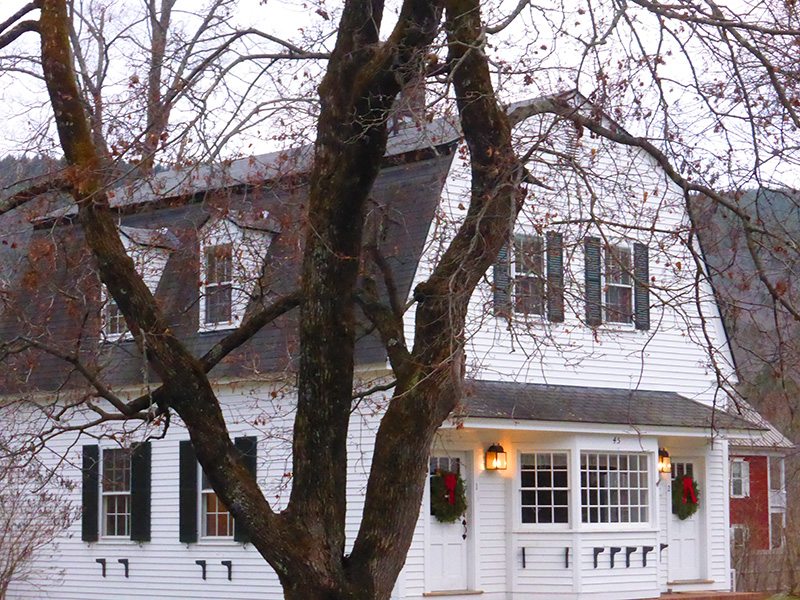 About the Windham Foundation

The Foundation was named the Windham Foundation because Grafton is in the county of Windham. Dean Mathey could easily have called it the Mathey Foundation, and the fact that he didn’t speaks volumes for the philanthropic nature of the man. After his death, he left his residual estate for the continuation of the Foundation’s work.

“The mission of the Windham Foundation of Grafton, Vermont is to promote the vitality of Grafton and Vermont’s rural communities through its philanthropic and educational programs and its subsidiaries whose operations contribute to these endeavors”.

The first President of the Windham Foundation was Mat Hall, Mr. Mathey’s cousin. He and his wife did a lot of work including the restoration of the Grafton Inn in 1964. The foundation has contributed to many aspects of Grafton being the storybook setting for quintessential Vermont dreams. 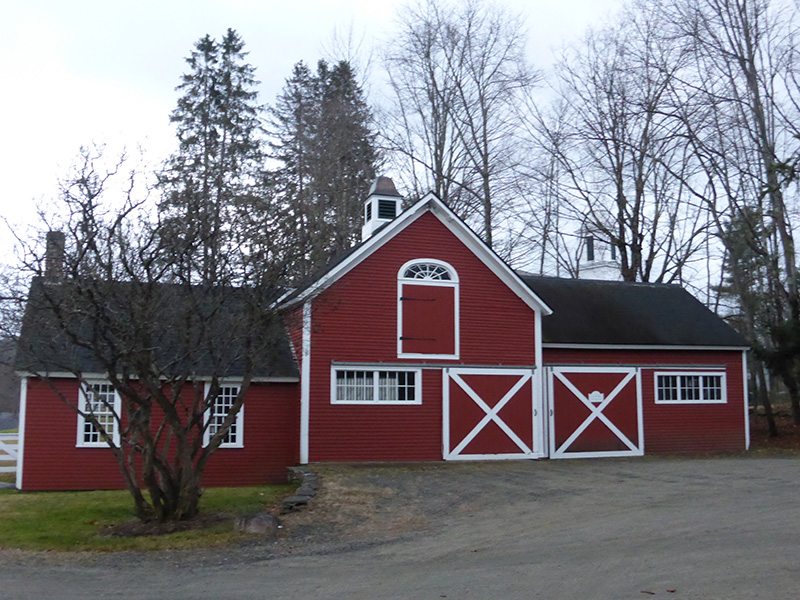 More About the Windham Estate

The Windham Foundation also operates the Grafton Village Cheese Company. Grafton, Vermont is the perfect setting for world-class cheddar. Cheesemaking traditions in this historic village date from the 19th century. The Grafton Cooperative Cheese Company was founded in 1892 by dairy farmers who gathered together in a cooperative to make their surplus milk into cheese. In the days before refrigeration, there were many such cooperatives in the rural buy cialis mumbai agricultural communities and an abundance of fresh, creamy milk was turned into a food that could be stored for a longer period of time. As a part of the Windham Foundations mission, the money made from selling the cheese or us buying the cheese and we did, goes directly back into the preservation of Vermont villages. The smaller and original cheese factory is in Grafton while the larger one is in Brattleboro. 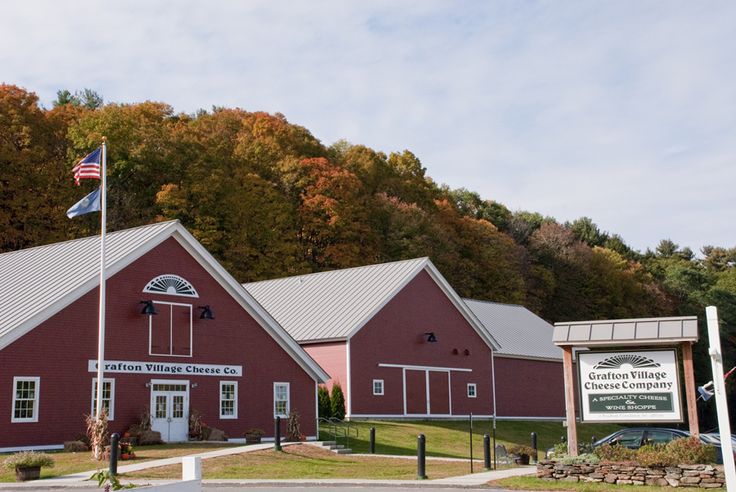 And the People Come

Grafton attracts people for many reasons. There is a plethora of outdoor activities on the doorstep, and then there is the romantic Grafton Inn, which people flock to.

How Far Away is Grafton

Grafton is actually well situated and about 4 hours from New York, 2.30hrs from Boston, approx. 2 hrs from Connecticut and 4 hrs from Montreal.

This link has the perfect driving routes from wherever you are coming, so just click here for getting to Grafton.

Want to get married here in this most picturesque of settings? Then you had better book quickly as this is a sought after wedding venue. With the Windham Foundation owning many cottages in the town, you can have all of the wedding guests stay right in the town. 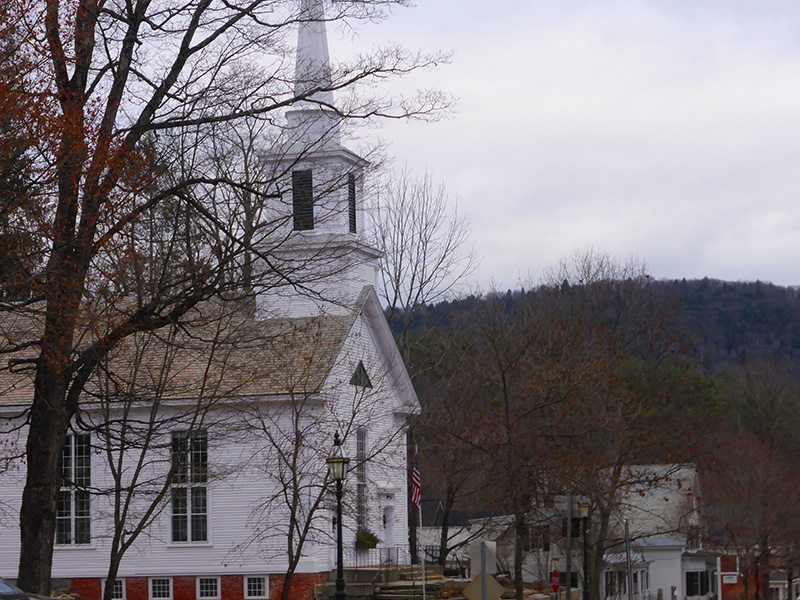 The Millennials have discovered the Grafton Inn

There are return visitors who just love the place, and now the Millennials are right into this artisanal living and they too are coming. The Millenials have come to discover and love the Grafton Inn. It provides all of the needs of the modern day traveller with lighting fast internet, and that quality of food made from local ingredients that give it that artisanal attraction. With many outdoor activities and that much needed massage at the end of the day, this is a new growth industry for not just Grafton but all B&B’s.

For the Outdoor Enthusiast

The year round Grafton Ponds Outdoor Center offers 2,000 acres of scenery, trails and grounds. As a guest of the Inn, you enjoy complimentary trail use at Grafton Ponds. In the summer, you can go mountain biking, trail running, a bike terrain park, hiking, canoeing, fly-fishing instruction, and swimming.

In winter, you can snowshoe, Nordic ski, backcountry ski, do the biathlon course or just have a load of fun on the 600-foot snow tubing hill. 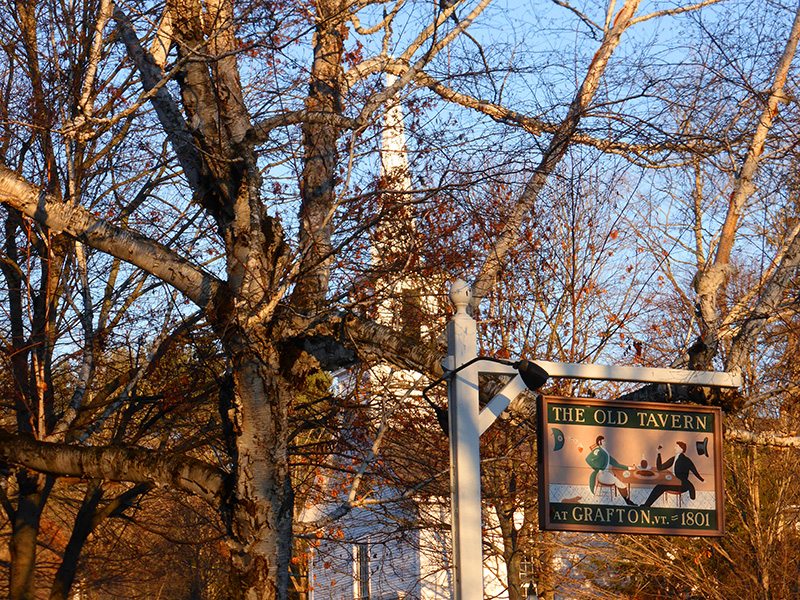 For the Cheese Lover

Visit both the Grafton Village Cheese Company sites. This is where you can sample handcrafted aged Vermont cheddar cheese and other local products. If you are staying at Grafton Inn, uou will have cheese in your room and cheese offered to you at afternoon tea and dinner, and it is good.

For the Music Lovers

For more than 20 years, Grafton Ponds has been home to the Vermont Symphony Orchestra concert and fireworks under the stars every July 3.

The Phelps Barn Pub, on site at Grafton Inn, has local music on often and attracts not just the locals but from people further afield. It also has one of the most beautiful bars made by a local from local wood and designed by a local.

For the downhill skier

Bromhill Mountain Ski Resort is just 16 miles from Grafton.  Okemo is 30 minutes away and Stratton about 35minutes. There are terrains for all levels of skiers.

The Retreat Farm is a neighboring Brattleboro and is a
Center for conservation, education, recreation, and sustainable enterprise in Southern Vermont. It is a great place for kids and adults alike. Here you can hold a newly hatched chick, feed a one-ton oxen and room a miniature horse.

The Foundation purchased the Retreat Farm In 2001 preserving & protecting 475 acres of land and historic buildings in partnership with the Vermont Land Trust.

For the Animal Lover

Grafton Inn is pet friendly and has stables should you want to bring your horse, and miles of trails to ride on.

More About the Grafton Inn

The Old Tavern Restaurant within the Grafton Inn is Farm to Table cuisine, prepared with fresh locally sourced food. Dinners are a la carte from the very clever chef, and breakfasts are also a la carte with a very diverse choice and a chef willing to mix and match so that I could have both blueberry pancakes and french toast with maple syrup.

Phelps Barn Pub was once a carriage house for guests’ horses, but now it is the town’s meeting place, giving guests a chance to mingle with the locals. There is an extensive menu and also a great selection from the famous Vermont craft beer scene.

You could also choose to laze away sometime in the very well appointed rooms, have a long soak in the deep baths, enjoy afternoon tea and then head a few steps away to enjoy the ambience of Phelps Pub. 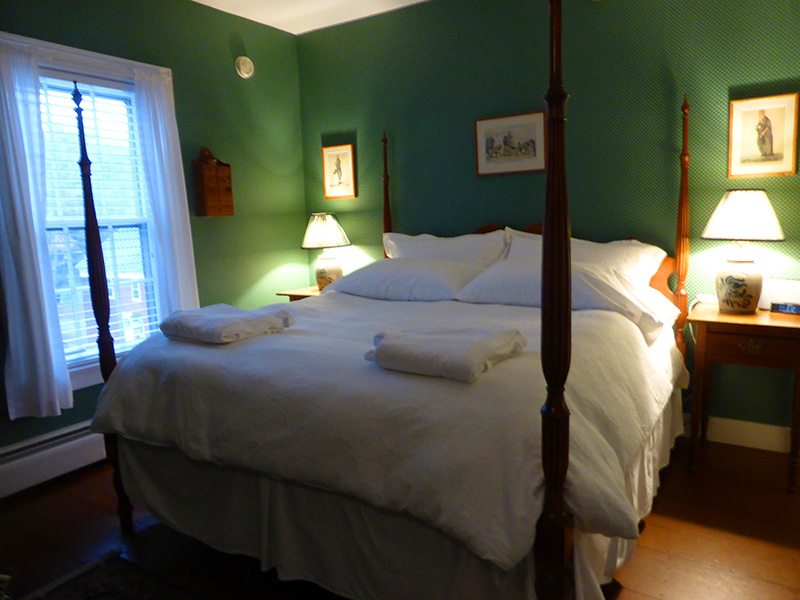 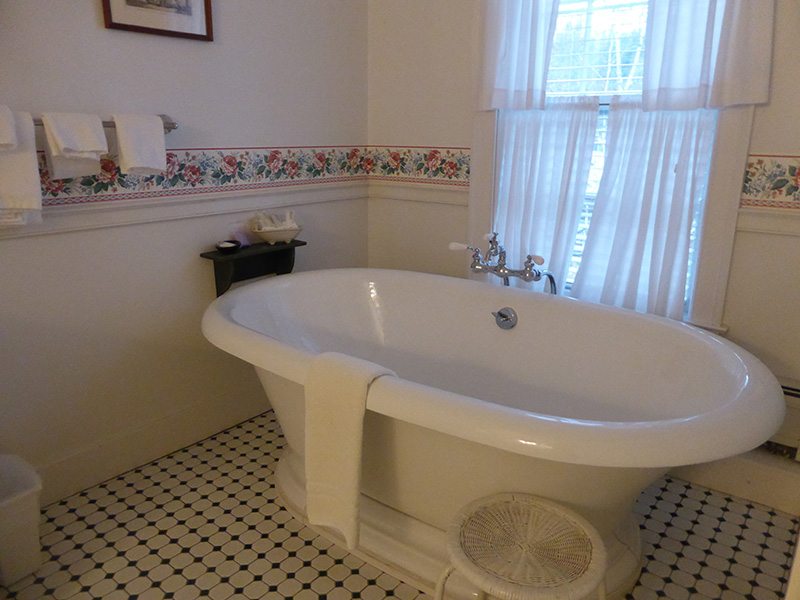 As one of the Distinctive Inns of New England, Grafton Inn Vermont is certainly another unique property. It is very easy just to enjoy the ambience of the inn, in any of the many parlour rooms or to sit outside on one of the rocking chairs and watch the Pretty as a Picture little village and the amazing surrounds.

The writers were the guests of Distinctive Inns of New England and Grafton Inn Vermont and thank them for their hospitality.